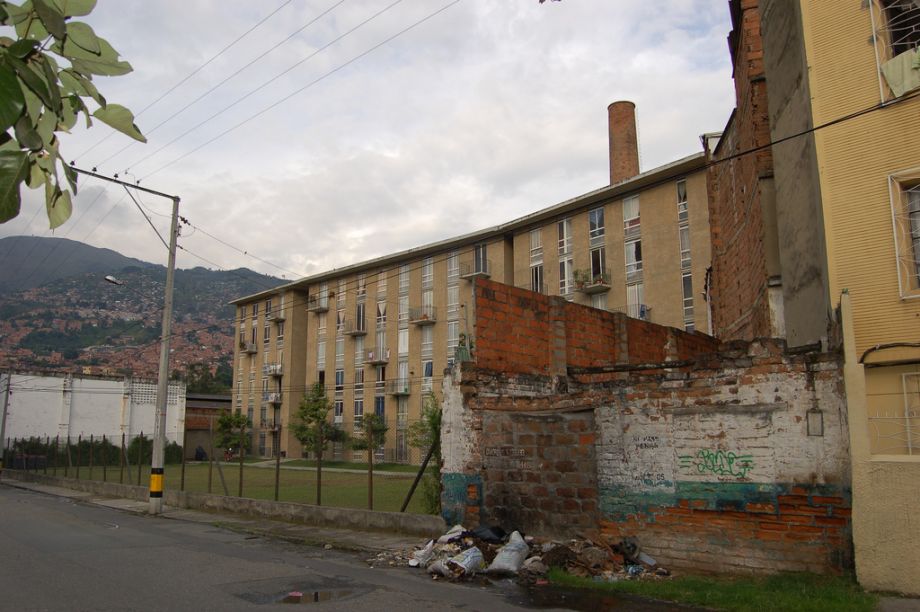 While no city could effectively confront its resilience challenges without the political will of the local government, the importance of private- and third-sector collaboration cannot be overstated. In Medellín, a prime example of such assistance can be seen in Fundación SonRío, an organization that battles to take the message of energy efficiency and good practice in recycling to the local community.

The foundation owes its existence to the two directors of a local advertising company who understood the need for civic action after looking back into the city’s past.

“We were looking at some old photos of Medellín and it made us think about climate change,” says Juan Camilo Vásquez Roldán, CEO of the marketing agency CVML. “In photos of Medellín from the 1920s, the people dressed for tierra fría (the cold world). Nowadays, to put on a tie or a jacket is madness.”

According to Vásquez, as he and his colleague talked about what climate change will mean for future generations they realized that their communications and marketing background stood them in good stead to rouse environmental awareness among the community.

“The question of social responsibility is fundamental to us,” says Vásquez. “It’s part of our reason for being and part of our mission.”

It’s an outlook that helped CVML win a regional award for philanthropy in mid 2013, and that gave birth to Fundación SonRío two years ago. Since its establishment, the foundation has embarked on programs of environmental awareness and support for the city’s professional recyclers that have garnered the backing of the city government, private enterprise and international bodies such as Greenpeace and the World Wildlife Fund (WWF).

Thousands of recyclers trawl the streets of Medellín every day collecting plastic and glass bottles, cans, heavy cardboard and wood. The work is informal, demands long hours and involves the inherent risks that accompany sorting through bins and sacks of refuse in which dangerous and contaminated waste is mixed in with recyclables. Among its efforts to support these workers, Fundación SonRío has provided the use of vehicles to transport material to recycling plants, as well as donated uniforms and personal protective equipment to hundreds of recyclers.

According to Fundación SonRío’s Director Sandra Bedoya Marulanda the endeavor is made urgent by the city’s critical lack of landfill space. “One [of Medellin’s two landfills] is nearly full and the other does not have much space left,” she says. “Separating trash correctly, so less goes to landfill, is crucial to the future of the city.”

Recent reports indicate that 88 percent of the 1,800 tons of garbage collected each day in the city ends up in a landfill. Empresas Publicas de Medellín (EPM), the public entity that oversees rubbish collection, recently announced a $7 million project aimed at easing the situation and has set a long-term target for local businesses to send just 10 percent of refuse to landfills.

Yet the situation grows worse every day, and adds gravity to Fundación SonRío’s message, which it has sought to spread through the 16 urban districts and five surrounding rural zones, known respectively as “comunas” and “corregimientos.”

One platform for that message has been a recycling competition sponsored by the foundation. Backed by local businesses and in partnership with the office of the city’s secretary of environment, the July to October competition offered the top performing comuna and corregimiento $50,000 each. With a local TV and radio campaign, old-fashioned boots-on-the-ground canvassing from community leaders and appearances by Fundación SonRío’s leaders at public events, news of the challenge spread, and all of the recycled material collected by municipal garbage trucks and manual recyclers was recorded and tallied up.

“This competition was aimed at strengthening the recycling culture of the city,” says acting Environment Secretary Guillermo Leon Diosa Perez. He emphasized the importance of changing the sometimes negative perception people have of the city’s recyclers, who Diosa says are “of critical importance to the city.”

At the close of the competition, Belén emerged as the victorious comuna, while Santa Elena won among the corregimientos. Prizes were formally presented at an environmentalism-themed Christmas ceremony staged by Fundación SonRío in December.

For Hector Ignacio Uribe, then technical secretary of Belén’s environmental roundtable, it was a victory fortified by years of community activism to promote conservation.

“Here we already recycled out of conviction to support our eco-gardening project,” says Uribe. His organization has promoted correct separation of recyclable, non-recyclable and organic material to support this eco-garden – on a plot donated by the city eight years ago – fed by homemade compost. For Uribe, the competition boosted the work of his organization, which has built a butterfly enclosure and teaches composting and craftwork with discarded materials to school groups and visitors.

Winning the competition has also given the group the resources to promote the proper recycling of organic waste, something Uribe is passionate about. “They offered us a carrot and we took it,” he says.

While the use of the money has not been finalized, the roundtable has proposed a pilot scheme in which it would provide a subsidy to buy recyclable materials at a higher price while encouraging the separation of organic waste. According to Uribe, such waste makes up 50 to 60 percent of people’s garbage and could be put to practical use such as composting while freeing up critical space at the city’s teeming landfills.

It’s a message he wants to promote in Belén, and that he hopes to see taken on by the city at large.