Adapting to Climate Change in The Valley of the Sun 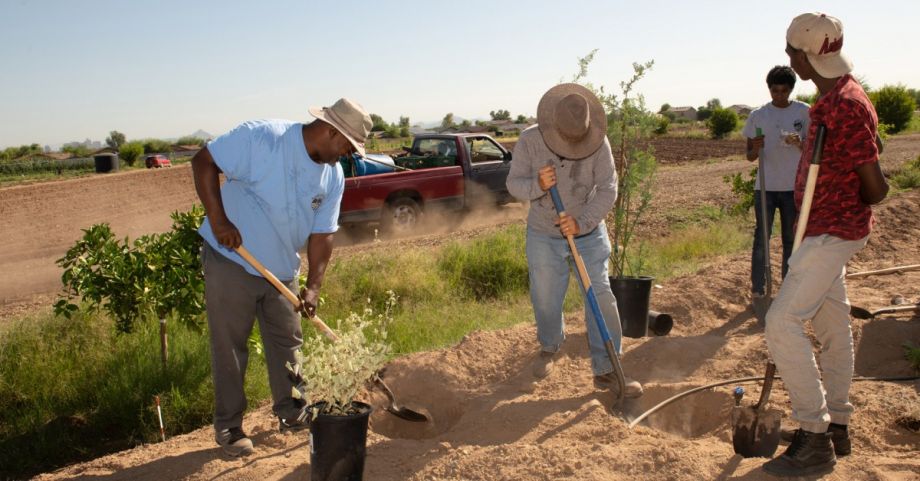 If a barefoot giant were to take a walk through your neighborhood on the hottest days of the year, where would he step to avoid being burned?

This was the question Arizona State University researchers posed to residents in three of the hottest neighborhoods in Phoenix where a team of city planners, urban-resilience researchers, and community-based organizations guided Saturday workshops during the summer of 2018. The Nature’s Cooling Systems project’s objective was to build heat-resiliency plans to help communities face a warming climate, but it was the method for gathering information through storytelling that made this project particularly unique.

“People in underserved communities feel that extreme heat is a big issue, but it’s just one more thing they need to deal with,” says Diana Bermudez, director of special projects at The Nature Conservancy in Arizona, the lead facilitator of the project. “People feel there’s nothing they can do about it. That this problem is so much bigger than them.”

The neighborhoods of Edison-Eastlake and Lindo Park-Roesley Park in Phoenix, and the Mesa Care neighborhood in Mesa, have been coping with extreme heat for years in their own ways. The residents know their neighborhoods’ hot and cool spots intimately.

The three communities chosen for the project had some factors in common — high surface temperatures, average to low vegetation, and a history of heat-related mortality and illness, among other things.

“The hottest communities are also those with the lowest tree canopy cover, and the highest percentage of child poverty,” says Bermudez.

They also represent some of the most vulnerable populations in Phoenix — indigenous and communities of color, and victims of redlining. Though these communities shared similarities on the surface, heat-action planning was not a one-size-fits-all situation.

This was not a scenario where the city could churn out vulnerability maps and plop down trees, says Melissa Guardaro, assistant research professor at Arizona State University, who wrote the methodology for the project. Each of the communities had a different history, a different demographic makeup, and different needs.

“The goal was to have people who have lived this experience design their own solutions,” says Guardaro.

This was a lesson in storytelling wisdom, says Guardaro, that entailed listening to the residents’ concerns, giving them the autonomy to point out hotspots and suggest solutions based on what’s worked for them before — then combining those stories with scientific data.

“People had stories. They told us how they kept cool historically,” she says. “There are indigenous ways to keep cool in the desert.”

Ollas, known as the “first air-conditioners,” were one such historical cooling method, she says. These clay jars were made with a tapered shape, which effectively cooled the water inside using principles of evaporative cooling. Ollas would be hung in doorways, or used for garden irrigation.

Phoenix, Arizona is considered the hottest city in the U.S., and one of the most vulnerable to climate change. This summer it hit a record-breaking 50 days at 110 degrees. That number is expected to more than double by 2060.

Cities are already hotter than rural areas due to the “heat island effect,” and projections are they will only get hotter.

Equity plays a role in who has to beat the most heat. In Edison- Eastlake, only about 5 percent of the neighborhood has trees, and at night temperatures are as much as 10 degrees hotter than in wealthier neighborhoods. The rate of heat-associated death is 20 times the county average.

Jessica Bueno, of Phoenix Revitalization Corporation, works directly with this frontline community, and says that education about climate change and distribution of heat islands was the most significant takeaway from the project workshops.

“People were shocked to hear that the neighborhoods three miles away were not as hot [as theirs],” she says.

This education was paramount in equipping the residents with the autonomy to get in front of the decision-makers, she says.

It was difficult to get the residents to come to the workshops at first, says Bueno. They tend to get surveyed and studied a lot, but nothing ever changes.

“I really appreciate the approach that TNC has taken. They don’t just come into neighborhoods and say ‘this is what’s going to happen’,” says Bueno. “It’s important for residents to be able to connect their own dots.”

They’ve already been able to use the knowledge from the workshops to take a stand against heedless development in their communities, she says.

Though COVID-19 has put a lot of construction on hold, some new heat plans have been put into action since the initial planning process ended this past May. In one hotspot that was identified near a high-traffic park and supermarket, a total of 19 desert-adapted trees were planted around the perimeter of the property this summer, and an irrigation system for stormwater retention was installed, which is estimated to capture approximately 52,000 gallons of stormwater each year, reducing the demand for tree watering, and purifying the stormwater.

The South Phoenix Lindo Park community has a rich agricultural history, and the residents wanted shade solutions made of only trees, as opposed to human made structures, says ASU’s Guardaro. This past summer local residents participating in Tiger Mountain Foundation’s landscaping workforce development program completed the “Spaces of Opportunity Garden” at the edge of a working urban garden where the community often gathered, but suffered from heat exposure. The workforce planted 11 desert-adapted trees, 86 shrubs, and 25 cacti and succulents on the barren 16,000-square-foot-strip of land. They built stormwater infrastructure to effectively support the vegetation and trees, which will capture an estimated 85,000 gallons of water annually. They also installed educational signage naming different tree species and outlining nature’s role in mitigating urban heat.

Many residents continue to meet regularly with their community-based organizations, developing leaders and planning for a not-so-hot future.

“Now the community owns these plans. It’s up to them to push it through these systems. This is not city-led, it’s community led,” says Guardaro.

Next City is a partner in #CoveringClimateNow, a global journalism collaboration strengthening coverage of the climate story.

Claire Marie Porter is Next City’s INN/Columbia Journalism School intern for Fall 2020. She is a Pennsylvania-based journalist who writes about health, science, and environmental justice, and her work can be found in The Washington Post, Grid Magazine, WIRED and other publications.