These Actors of Color Weren’t Getting Roles, So They Started Their Own Theater – Next City

These Actors of Color Weren’t Getting Roles, So They Started Their Own Theater 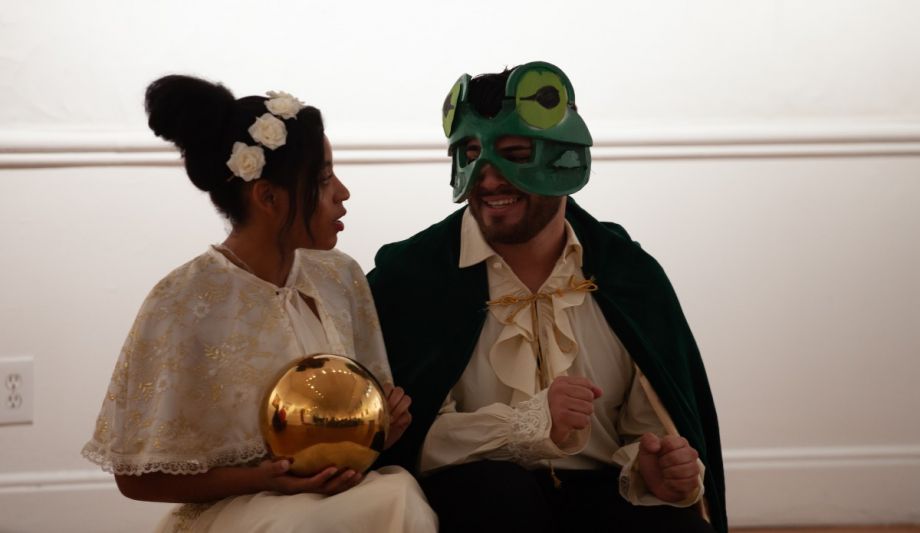 Three weeks before showtime, Sasha Johnson rehearses scenes in an art gallery on the edge of Detroit’s Woodbridge neighborhood. The show, a four-person performance put on by Black and Brown Theatre, a Michigan nonprofit that seeks to create opportunities for professional theater artists of color, is a chance for Johnson to build a resume in an industry plagued with inequity.

Johnson’s been acting since high school. She got her professional start as a student at Henry Ford College in Dearborn, Michigan. There, she says, all of the directors were white, but she still landed lead roles. It wasn’t until auditioning for roles outside the college that Johnson faced barriers preventing actors of color from gaining an equitable voice in the professional theater industry.

Despite multiple auditions, Johnson says she hasn’t been cast in a single role in the predominantly white theaters she auditioned for.

“It could be lack of talent,” says Johnson. “But I don’t really see anybody of color on their [white-run theater companies] stages.”

When actors of color do secure jobs in white-run film and theater productions, Black and Brown actor Justino Solis and others say they are typecast in stereotypical roles: an illegal immigrant, a single mother, victim of police brutality, a maid, a thug.

Since joining Black and Brown Theatre in June, Johnson says she’s been granted an opportunity to network, grow, and develop her acting skills in an environment where everyone is a theater artist of color.

At Black and Brown, the goal is to create a theater industry that reflects the racial diversity of the region.

The region’s largest city, Detroit, is 79 percent black. The Arab population in metro Detroit, at 42 percent in the Detroit suburb of Dearborn, is one of the largest in the country.

“We try to have a diverse team,” says Black and Brown co-founder Emilio Rodriguez, who is Puerto Rican and Mexican. “Not just racially diverse, but where they come from and what communities they’re connected with.”

Rodriguez, a California transplant, founded the theater company after moving to Michigan for a teaching job. He says he became involved in the local arts movements, and noticed that actors of color were being excluded from Detroit’s theater scene.

Rodriguez says he didn’t immediately notice the inequities because his first few shows had a small cast. He says most Michigan theaters have an open door policy, as compared to California where you need to fit Hollywood’s image — light complexion, slim, fitness model — to be invited to an audition.

Black and Brown’s racial makeup of actors is nearly identical to the demographics of Detroit. Rodriguez estimates that 80 percent of his actors are black, 15 percent are Latino, and five percent are Arab American. The theater has a small percentage of Asian actors, too.

To combat inequity, Black and Brown exclusively casts actors of colors in its shows, and has artists of color staffing their productions, too. They also sponsor a database that houses the headshots and resumes of over 100 actors of color.

Rodriguez says the database is used by directors to cast plays, movies, and other acting gigs.

Still, the database isn’t a perfect solution. For actors of color, the comfort of not being typecast at a non white-run theater company comes at an economic cost, as racial minority-focused arts and culture organizations are also discriminated against at the grantmaking level.

Michigan’s theater scene is only a microcosm of the national funding disparities between white-run theaters and black and brown ones.

In Chicago, between that same period, the funding gap between racial minority-focused arts and culture organizations and groups that were not was nearly $300 million. This is compared to $143 million in Pittsburgh, $285 million in Philadelphia, and over $1 billion in New York City.

According to a 2017 union report by the Actors’ Equity Association, a labor union representing American actors and stage managers in theater, white actors received nearly 70 percent of new principal contracts — speaking roles — from 2013 to 2015. Of the 30,452 new contracts, black actors received nine percent, while two percent went to Latinos and Hispanics.

In stage management, Asians received $20 less than whites, but $20 more than blacks and Latinos.

For Black and Brown’s most recent production, actors were paid a modest stipend of $100 for seven rehearsals and three performances.

Rodriguez says the pay is low, but that the theater is transparent with actors about how much funding they receive, and how it affects what the company is able to pay for performances.

“I believe artists should be compensated,” says Rodriguez. “[Pay] validates that they are professionals.”

In southeastern Michigan, Rodriguez says that non-equity theaters — companies that aren’t represented under AEA — pay between $250 to $500 for 16 rehearsals and 12 to 15 performances. This is compared to equity theaters that pay $150 to $400 per week for six weeks of rehearsals and four to eight weeks of shows.

“With union actors, [Actors’] Equity looks at me the same way it looks at a white theater company,” says Gary Anderson, artistic director of Plowshares Theatre Company, a black-run theater company founded in 1989.

With a smaller budget than the typical white-run theater, Anderson has less money to pay actors.

Anderson says that black-run theaters are held to an unrealistic standard while competing for grants against white-run companies who are often given leeway by funders.

“Many foundations have a requirement that the arts organization applying have a budget of over $100,000 and an audit, which is supposed to communicate fiscal responsibility,” says Anderson. “But historically we’ve had art institutions … exists with massive debt on their ledgers.”

This year, Plowshares was awarded a $75,000 grant from The Kresge Foundation. (Kresge also provides support to Next City.) But Anderson says significant grant funding is rare, and that the theater is looking at ways to become self-sufficient without grants.

Rodriguez says the goal is for Black and Brown Theatre to no longer exist, with a vision that professional theaters will eventually hire actors of color in an equitable manner.

In an effort to address inequities at the grantmaking level, some say that actors of color have to remain visible, and remain vocal about racial discrimination in theater funding.

A two-year strategic plan by the Michigan Council for Arts and Cultural Affairs, a state agency assigned to develop grantmaking and arts and culture policy, also seeks to increase access to Michigan’s arts and culture scene.

Chad Swan-Badgero, an arts education program manager with MCACA, says that to increase diversity, Michigan arts professionals can apply to be a panelist for the agency’s grant funding process.

Others agree there needs to be a change in leadership at the decision-making table.

“If it’s going to change we have to change it,” says Solis. “We have to get the position of power. We have to be behind those grants.