AAA: Cost of Car Ownership on the Rise – Next City

AAA: Cost of Car Ownership on the Rise 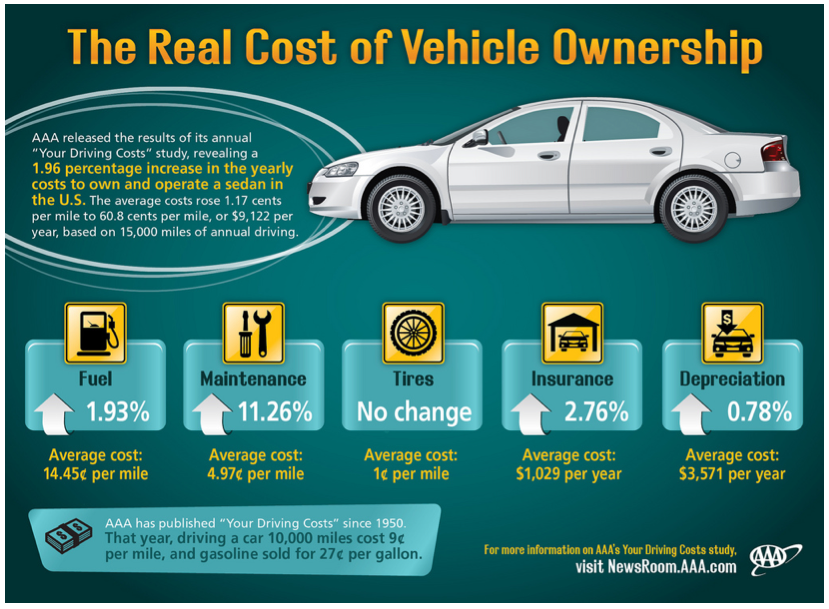 This graphic breaks down which aspects of car ownership have risen in cost since last year. Credit: AAA

For car owners, the only good news to come out of this year’s “Your Driving Costs” study, an annual report from AAA, is that the price of tires and tire maintenance has not gone up. But all other costs of car ownership, from gas to insurance, have collectively increased by nearly 2 percent since last year.

SUVs continue to reign in the price department, putting drivers with a penchant for big cars back an average of $11,599 a year. Conversely, small sedans represent the most cost-effective option, at $6,967 a year.

And that’s not even accounting for parking fees and potential tickets.

Different types of cars and their average annual cost to drivers. Credit: AAA

For many, the rising costs of car ownership are making public transit sound more and more enticing. Transit ridership climbed to its second highest level since 1957 last year, indicating that more Americans are willing to consider alternatives to the automobile.

Based on the price of a monthly transit pass, the yearly costs of riding public transit are significantly lower than relying solely on a car to get around. To that end, here is what a transition to public transit will cost you in four different cities across the country:

In Philadelphia, a monthly pass from the Southeastern Pennsylvania Transit Authority is $83 a month, or $996 a year, and includes unlimited travel on the subway, trolleys and buses within the city. Rail and bus Commuters from the suburbs and farther-flung city neighborhoods will spend between $91 and $191 a month, or $1,092 and $2,292 a year, depending how far outside of the city they live.

In Chicago, commuters that only come into the city on weekdays during peak house on either train or bus spend only $55 a month, or $660 a year. The Chicago Transit Authority also offers a $100 monthly transit pass that is valid any time of the week. Transit passes in Chicago include both rail and bus transportation to the suburbs.

A monthly transit pass from the Memphis Area Transit Authority is even cheaper, at $50 a month ($600 a year), and is valid on both buses and trolleys throughout the Memphis area. A six-month trolley pass, which travels around downtown Memphis, is $75.

Even in car-loving Los Angeles, riding mass transit is still significantly more affordable then using a car to commute. A monthly pass from LA Metro that is valid for both the MetroBus and MetroRail costs only $75 a month, or $900 a year. A monthly pass that allows users to use not only the LA Metro system but neighboring systems as well is $84 a month, or $1,008 a year.