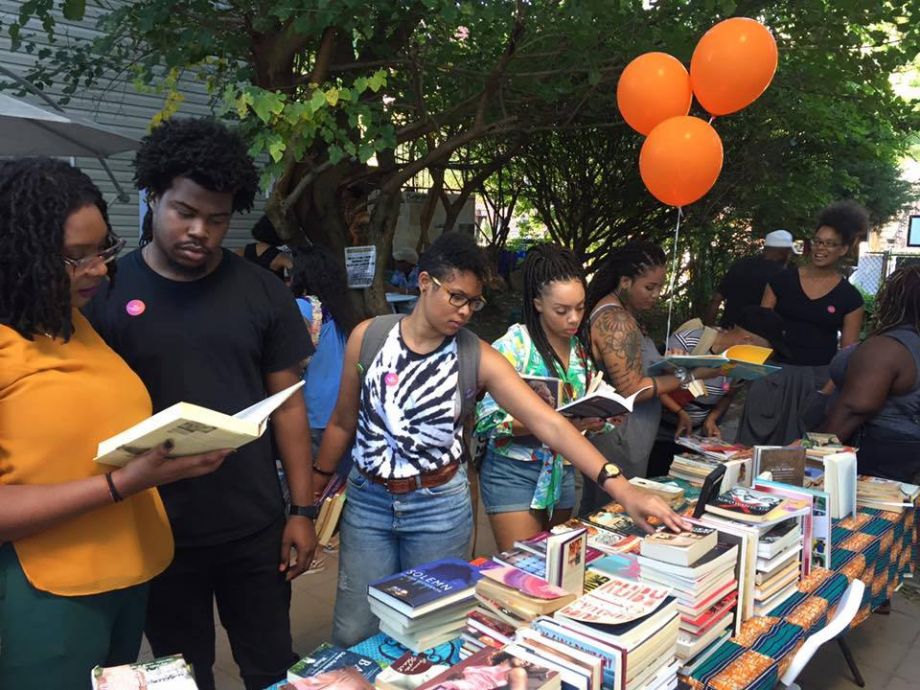 In the summer of 2019, a group of women gathered at MoCADA House on Governors Island in New York City to talk about Adrienne Marie Brown’s book, Pleasure Activism. Interdisciplinary artist and set designer Ola Ronke Akinmowo, who hosted the event, says, “We had this conversation about pleasure, and there were women from their early twenties all the way up to their sixties. We had women who were trans, nonbinary, gender nonconforming, and women who don’t have a sense of what these things mean but they’re open to learning and being engaged in the discussion. It’s really beautiful to see this connection between these demographics and age groups, especially with something so intimate as pleasure. We had people talking about polyamory, nonmonogamy, BDSM and kink and they were all into it.” This conversation was hosted by Akinmowo’s popup library and art installation, the Free Black Women’s Library.

Akinmowo got the idea for the Free Black Women’s Library in the spring of 2015. She had been inspired by Kimberlé Crenshaw’s Say Her Name initiative that highlighted and amplified the stories of Black women and Black girls who had been victims of violence. Akinmowo says, “I was really eager to do a similar project where Black women and Black girls are centered, but I wanted to do something that felt a little less jarring. I did a couple of different direct actions through Say Her Name and I found it to be really emotionally debilitating and hard for me personally. I wanted to do something that focuses on us, but also feels really good at the same time.” She had always loved libraries. Akinmowo says, “There’s something about books that brings people together and makes us feel really good.”

Akinmowo hosted her first popup library on a stoop in Bed-Stuy in 2015 with about 100 books. Since then, the Free Black Women’s Library has accumulated over 3,000 books written by Black women of every genre. The books are donated by writers, publishers, and readers. “People from all over the world send me books,” said Akinmowo. When a new book comes out, she will often write to the publisher or the author and they will usually send her at least one copy. She says many of the titles in the library are not available in public libraries such as New York Public Library or Brooklyn Public Library, and she has some titles that are hard to find in stores (or are rare editions).

The main thing distinguishing the library from a public library is that you do not have to have a library card. You can also keep your book if you exchange another book. Says Akinmowo, “If you fall in love with a book, unlike a library, you can keep that book forever.” So the library deviates from your library system where you have a deadline to keep the book, and Akinmowo says sometimes people keep books for a year, adding, “The books kind of work as your currency. There is no purchase.”

Since its inception, the library has popped up twice a month, or sometimes more, although it has only had one socially distanced event during Covid. Each event hosts somewhere between 70-200 people and Akinmowo estimates that she has had about 10,000 visitors in the past five years. It functions as a popup installation at museums, art galleries, schools, community gardens, festivals and churches. Akinmowo is always careful to place the library in an easily accessible space without any entry charges. She wants her collection to be available to anyone who wants to use it. The library has drawn a variety of crowds, including writing groups who meet each other at the library to write poems together and a women’s bike crew whose tour of Brooklyn ended at the library.

The Free Black Women’s library also produces events centering Black woman writers. When Kaitlyn Greenidge’s novel We Love You Charlie Freeman came out in 2016, she was excited to do a presentation about her book at The Free Black Women’s Library. Greenidge had worked with Akinmowo previously at the Weeksville Heritage Center, a museum in Crown Heights. Greenidge says, “When [Akinmowo] started the library, I was excited about the project because I knew it was going to be special because she’s so thoughtful and really grounded in the history of any project that she takes on.”

“When it first started,” she adds, “it was hard for people to wrap their head around what a free library is and how that’s supposed to work. But it’s so simple. You have something that so many people enjoy, which is reading a book and then wanting to share it with somebody else.”

The Free Black Women’s library has also visited other states, doing presentations on Black writers. Because it is impractical to travel with 3,000 books, Akinmowo says she travels with about 300 books at a time: “I have a really nice suitcase, so I’ll just pack the suitcase with one nice dress and the rest will be books.” What books she brings with her depends on the presentation, says Akinmowo.“When I went to North Carolina it was for a presentation for college students that were studying Octavia Butler. So I did a presentation about her book The Parable of the Sower, and I took a lot of different books, but the large majority were Octavia, Nnedi Okorafor, N.K. Jemisin, Nalo Hopkinson, Sheree Thomas, all these Black speculative fiction, science fiction writers in addition to Audre Lorde and so forth.” When Akinmowo goes on tour, she installs her books on location. “Normally, I install the books in an art gallery, the library on campus, or in a student union type of space where the books are on display. The students and staff can come in and be in that space with the books.”

The Free Black Women’s Library has a dedication to Black women that goes beyond literature. When Covid-19 hit, the library launched the Sister Outsider Relief Grant. In response to the nationwide shutdown, the grant funds single Black mothers who are artists, writers, activists, and social workers. So far, it has given away over $40,000 in aid to Black mothers who, according to Akinmowo, “are doing things to nurture, support, and bring beauty to their community and to the world.” Akinmowo noticed a lot of mutual aid funds at the time, but she didn’t notice anything specific to Black creators who could not file for unemployment benefits. The Free Black Women’s Library also supports Providence House, an organization that provides transitional housing for women, by installing a permanent library in one of their homes that has been well received. They will be adding at least three additional libraries when Covid restrictions loosen.

Currently, the Free Black Women’s Library is raising funds for a bookmobile. Currently, Akinmowo uses ridesharing apps to travel. Akinmowo says that when she must take a Lyft, often they will not stop for “a Black woman standing on the corner with ten boxes.” She hopes to find a van, a bus, or a small school bus that she can convert into a bookmobile. Akinmowo says, “I’m a visual artist, so I picture it similar to a jewelry box with hidden drawers and moving the shelves up and around.” The Free Black Women’s Project is also raising funds for a brick and mortar reading room. She intends for the reading room to be a community place in gentrifying Bed-Stuy, citing the impact public libraries have had on her life.

The library has impacted visitors in a myriad of ways. Akinmowo said, “I have had teachers realize that they didn’t have any Black woman writers in their curriculum,” adding, “they didn’t realize that they were participating in erasure just by giving out a book list.” She also says that the response from Black visitors has been impactful, “There’s books like Sister Outsider where people become politicized by reading political texts. They realize their views are aligned with Black feminism and it snowballs into affecting the other types of books they read, or the types of choices they make, or the types of art they make.” Sister Outsider by Audre Lorde is one of Akinmowo’s favorite books, alongside Wayword Lives, Beautiful Experiments by Saidiya Hartman and Parable of the Sower by Octavia Butler. Right now, the most popular book in the collection is The Secret Lives of Church Ladies by Deesha Philyaw.

The Free Black Women’s Library has inspired similar projects all over the country, which Akinmowo endorses. Akinmowo says that there are Free Black Women’s Libraries in Detroit, Atlanta, Houston and Los Angeles. She’s working with an attorney to formalize the process — for now, people who want to duplicate her project make a verbal agreement that all events must be free and accessible, books in the collection must be written by Black women and Black nonbinary writers, and that books must be traded and not sold. “I’m hoping,” she says, “it will become a tiny cultural institution.”

Tags: new york city, for whom by whom, libraries, women