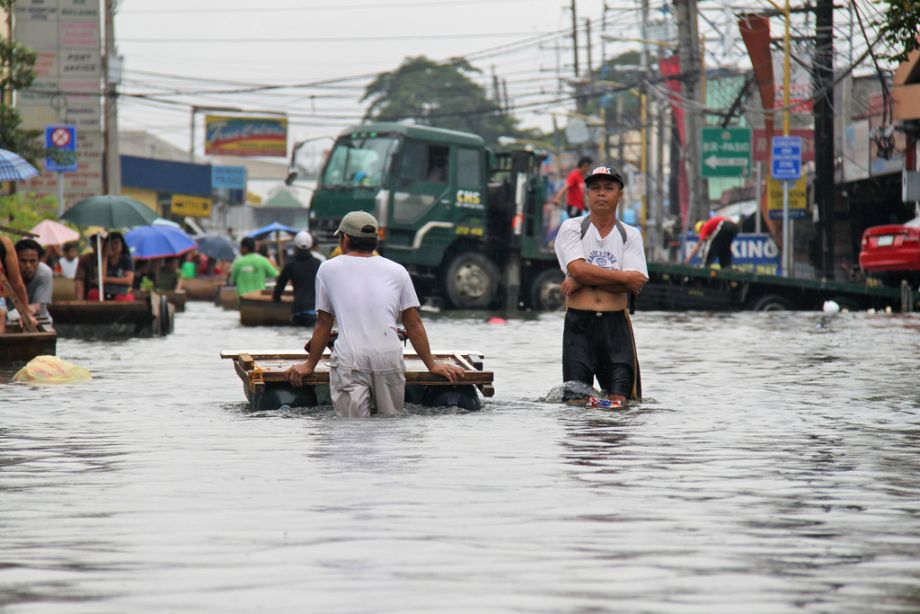 After a typhoon, so-called five-sixers loan money to victims at extremely high rates of interest. Photo credit: Department of Foreign Affairs via Flickr

“We’re rich too,” says Patricia Herrera with a good-natured laugh, “but only in misfortune. That’s our kind of richness.”

For 26 years, Herrera has lived in the slums of Binondo, one of the oldest and most densely packed neighborhoods of Manila. Wooden-board and cement-block shacks are stacked up haphazardly along the banks of an estuary, where the water runs thick and gray. Every couple of years, a catastrophic typhoon inundates the city and floods Herrera’s slum, washing away possessions, livelihoods, entire homes and the occasional life.

Herrera, 51, is a community leader with DAMPA, a nationwide organization that works with residents of flood-prone slums across the Philippines to increase awareness about climate change and disaster risk reduction. She’s also the treasurer for a self-funding savings and loan system to help finance disaster resilience in her community.

A few years ago, in 2010, Herrera started a water cooperative, which brought the first drops of clean, running water to her neighborhood since it was founded back in 1969. This arrangement dropped the price of water from 10 pesos (22 cents) per container, to 1.50 pesos (3 cents). Huge savings for a slum dweller, but it still earns the coop some money — about 110,000 pesos ($2,450) last year.

Using the proceeds from the water coop, Herrera started a simple savings and loan and system. She says that in her neighborhood, a person’s number one need after a typhoon is kabuhayan — livelihood.

Like many slum dwellers, the people in her neighborhood rely on informal work to get by: driving a bicycle with a sidecar, collecting scraps, selling grilled bananas or porridge, or running tiny shops selling single-serving packets of shampoo and instant coffee. “If that’s gone, then it’s over for you,” says Herrera. “It’s hard to bounce back.”

With no access to formal banking systems, the urban poor rely on informal money lenders, colloquially called “five-sixes.” They’re named after the usurious rates they charge for loans (for every five pesos they lend, they ask for six back), and are notorious for aggressive collection tactics. It’s a sign of how highly the urban poor prioritize rebuilding their livelihoods, that capital is one of the first things they seek out after a storm. But, Herrera says, a loan from a five-six can leave people drowning in debt.

“It weighs heavily on their lives,” she says. “We’re trying to take them down.”

The water coop’s savings and loan system charges a five percent interest rate — compared with the five-sixes’ 20 percent — and only for loans taken out to rebuild livelihoods. The average loan is about 6,000 pesos ($133). For medical assistance, they give 1,000 pesos, straight up, no returns. Same with burials. For housing, they loan 4,000 pesos, with no interest, and will also lend 1,000 to 2,000 pesos for school costs, again with no interest.

Rather than sending a grim-faced thug out to collect money every day like a five-six, Herrara’s clients — her neighbors, really — send their kids over to deposit what they can. Nearly every day, someone shows up at her house with 80 or 50 pesos, whatever they can afford, to pay back the loans, which are recorded in matching paper ledgers, one hers, and the other belonging to the client. “It’s easier on their business, and it’s easier on their minds,” she says. And because the coop isn’t taking money they can’t afford to give, families can spend it on rebuilding their house or buying their kids school supplies instead.

In three years, Herrera says, no one has defaulted on a loan. They know that the interest will go to helping others after a flood, and the money they give back will be available to them when the next flood comes.

The reach for the water coop’s savings and loan system is still pretty modest. Right now, there are eight families enrolled in the on-going livelihoods program, and 210 families have received loans or grants for medical, educational or other needs. Herrera hopes to expand the number of livelihood loans the water coop can afford to provide by two families per month, until everyone in her slum is covered.

Nevertheless, the success of the program is inspiring DAMPA to try to find ways to scale it up to other urban poor communities. Among the ideas being discussed by the leadership is a “piso-piso” savings system, where each family donates one peso per day. Part of it will be used to stock a food pantry, for emergency provisions immediately after a disaster. Then anyone with a disaster savings account will be able to draw on it when the time comes.

After decades of destructive typhoons, the urban poor of Manila know that money can’t stop the flood, but it can make it less devastating. Waterway slum communities have taken the city’s worsening flood problem in stride, but absorbing the financial cost of a disaster has always taken longer than mopping up the mud and hammering together a new shack. “Our neighborhood can recover in days,” Herrera says proudly, “as long as we have money to invest.”