A Storm-Water Drainage System Cleverly Disguised as a Park 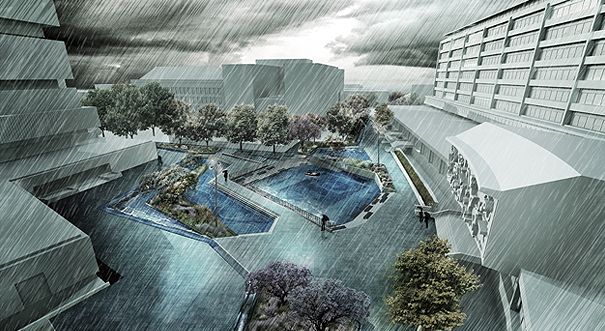 When it rains, the Benthemplein collects runoff and releases it back into groundwater. Image credit: de Urbanisten

Last fall was not kind to Rotterdam. In late October, the St. Jude storm shut down the city’s port and cost the country more than 95 euros million in damage. The Maeslant surge barrier was closed for the first time in its history as the entire coast of the Netherlands was put under alert. On Noordereiland, a residential island in the middle of the Maas River, streets were flooded up to the knee in early December and again on Christmas Eve. Around the rest of the city, hardware stores ran out of sump pumps as people worked furiously to drain basements and ground-level apartments. Each time, high tides combined with days of rainfall to inundate the city with more water than its world-famous water management system could handle.

It’s no secret that global climate change has brought with it more extreme weather. Last year, the Intergovernmental Panel on Climate Change (IPCC) produced a report linking man-made climate change and extreme weather events. The bad news? The report foresees a rapid sea level rise (28 to 98 centimeters by 2100) and more frequent storm surges as a result. As temperatures go up, rainfall will also increase, leaving arid regions even drier and wet regions like Europe much wetter.

One of the ways Rotterdam is adapting to this is with a focus on more storage for storm-water runoff. In fact, the city has made rainfall management a top priority for the coming years. At Benthemplein, in the city center, this commitment is manifested in a full-scale water square, an innovative project that bypasses the technocratic route by dealing with water in a playful, dynamic and very visible way. The site was chosen by the project’s partners — the local water board and the municipality of Rotterdam — partly because it’s in a high-flood-risk district. Speaking at the opening of the new Benthemplein, Water Commissioner with Schieland and Krimpenerwaard District Water Board, Chris van der Velden summed up the situation: “Rotterdam provides challenges to water specialists. Located in the Dutch Delta and highly urbanized, the city has no ‘natural’ relief system for peaks in waterfall. Keeping dry feet in this area requires appropriate measures, such as [these] water squares.”

The tiered, multi-colored square can collect 1.7 million liters of water from surrounding roofs and paved surfaces, then slowly release that runoff back into the groundwater and nearby canal. When the weather is dry, this one-of-a-kind sunken square acts as a recreation area for locals and students from a nearby school. The bottom tier is a sports field, while the ramped sides create a free-form skate park. It also functions as an amphitheater. But as rain begins to fall, the water square takes on another life. Shallow channels lined with stainless steel appear in the ground like an abstracted silver spiderweb. Beginning at the different entry points to the square, each narrow strip follows a unique path, some producing mini-waterfalls, some disappearing quickly into the concrete. When the rainfall is extreme, the sunken areas become deep pools, giving the square a completely different character.

As I wrote in a previous article for Next City, the project is part of the Rotterdam Climate Initiative’s work to develop innovative alternatives to current water management solutions. Dirk van Peijpe is co-founder and urban designer at de Urbanisten, the research and design firm behind the Benthemplein project. As he describes it, “The water square came out of a bigger question: Can we also improve the quality of the city and simultaneously integrate the challenges of climate change and extreme rainfall? Can we make Rotterdam a more beautiful ‘water city?’ This was about bringing storm-water management out of the realm of engineers and technical solutions and, of course, also about money: If you can access the money that is already there (in this case for storm-water management) you always have more options.” 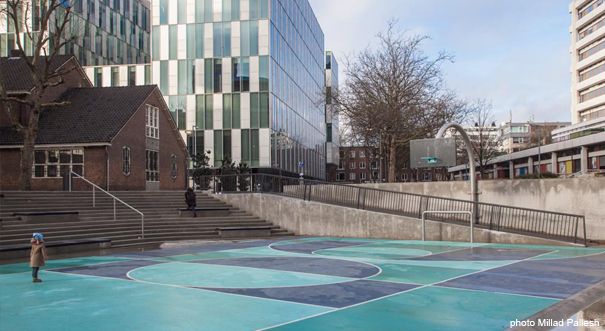 Amenities like this basketball court were incorporated into the design. Image credit: de Urbanisten

Van Peijpe is also adamant about the project’s social activation aspect. “You can involve people in this process because it’s visible — it makes climate adaptation part of their lives and adds value to the community. Last but not least, it also solves a very real problem for the city of Rotterdam.” As to the project’s precedents: “It’s not the first water square in the world, but in Europe it’s certainly never been done before. Combining water management and urban design was not on the agenda here until very recently. So to be precise, it’s the first large-scale water square in Europe.”

Designers at de Urbanisten worked on development for six years, using a participatory planning model that actively sought the input of local residents and different user groups. Students and teachers from the adjacent school, as well as members of a nearby church and neighboring gym were all involved in the design process. After a series of three design charrettes over six months, de Urbanisten was faced with a pile of seemingly incongruent requests. The local gym members wanted a place to play sports outside. Students from the vocational training school wanted somewhere to hang out — spaces with different atmospheres for chatting, sitting or smoking. The children’s theater wanted an outdoor space for performances. Everyone wanted free wireless internet. And the church members? They wanted a baptismal font in the middle of the square.

Combining these requests with the water storage and drainage capacity requirements for the catchment area took another year of designing before construction began in 2013. While the project is intended to work as a replicable model for other water squares, van Peijpe warns that there are two preconditions that have to be met for such a project to be successful — a lesson they learned the hard way after a pilot project at Bloemhofplein was rejected by local residents.

“In this case, we learned that you have to be part of a system-wide solution for the district you want to climate-proof. There must be a clear problem — it could be short term or long term and it doesn’t mean there has to be flooding every week, but in the end this is also about spending [public] money where the problem is. The second condition is that you have to actually improve the public space in a way that’s tailored to the community around it. Without those conditions you probably won’t make it through the first meeting.”

Since the Benthemplein water square opened in December 2013, users have slowly been finding new ways to enjoy the open area. “It’s not a great time to do an evaluation yet because all the greenery is still growing in and the weather’s been cold and wet. But when things perk up a bit in the spring we plan to go back in and see what we can learn from the local reactions.”

Today, de Urbanisten is working with a number of public and private partners to scale up the Benthemplein project to the entire surrounding borough of Zomerhofkwartier. “The city wants to move from individual projects (like the water square) to a more integrated city-wide process,” van Peijpe explains. If they are successful, the Zomerhofkwartier will be the first completely climate-proofed borough in Rotterdam, and a roadmap for the city’s future efforts. As van Peijpe shruggingly admits, this is all new territory for everyone. “That’s why we call it ‘learning by doing’ — you just have to start.”