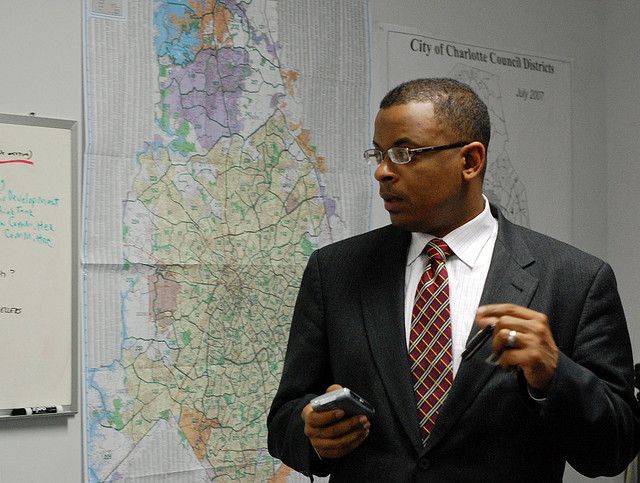 If the Senate confirms his appointment, Foxx — who this month announced that he would not seek reelection after serving one term as mayor of North Carolina’s largest city — will replace outgoing Transportation Secretary Ray LaHood.

Hailing from a city known more for exurban sprawl than its public transit system or urban core, the 42-year-old Foxx oversaw a number of measures to make Charlotte more sustainable during his tenure as mayor.

Notably, the city has embarked on an extension of its sole light rail line. Known as the Blue Line Extension, the effort will add 9.3 miles to route, which right now runs from the far southwestern neighborhood of Sterling to Center City. After the project wraps up, the Blue Line will continue northeast to the campus of UNC-Charlotte, spanning nearly 20 miles.

The extension, slated to open by March 2018 and which officials hope to begin construction on next year, will cost $1.2 billion. Last year, Charlotte won $580 million from the White House to help fund the project.

In addition to light rail, Foxx has been a vocal proponent of putting streetcars in Charlotte’s central business district. A part of the city’s capital plan for several years, the $119 million streetcar project would extend a starter line to become a 10-mile route in Center City, in the hopes that it would serve as a center of gravity to attract more transit- and pedestrian-oriented development.

But squabbles over funding have stalled the capital plan. This past February, Foxx criticized North Carolina Gov. Pat McCory when the latter said that implementing a full-fledged streetcar system would threaten funding for the light rail extension.

Despite championing these public transit efforts, Foxx has also come out in favor of highway extensions in his largely transit-starved region. He won the city funding to complete a 60-mile beltway and has supported widening I-85 from six lanes to eight.

When the news broke in January that LaHood would not serve a second term, a number of transit advocates fantasized that his position would go to a superstar like Los Angeles Mayor Antonio Villaraigosa or New York City Transportation Commissioner Janette Sadik-Khan.

Instead, as our friends at Streetsblog have already pointed out, LaHood’s successor comes from a background indicating that he’ll support “giving people more transportation options without making much of an effort to rein in sprawl infrastructure.”

A Republican, LaHood proved himself a progressive on transportation issues, calling on the government to treat walking and cycling as equally important as driving. The TIGER program, which launched in 2009, allows local governments to compete for money to fund a number of surface transportation projects — including $18 million worth of improvements to existing segments of Charlotte’s Blue Line in 2011.