In Philadelphia Neighborhood, a Model for Organizing Latino Businesses Grows – Next City

In Philadelphia Neighborhood, a Model for Organizing Latino Businesses Grows 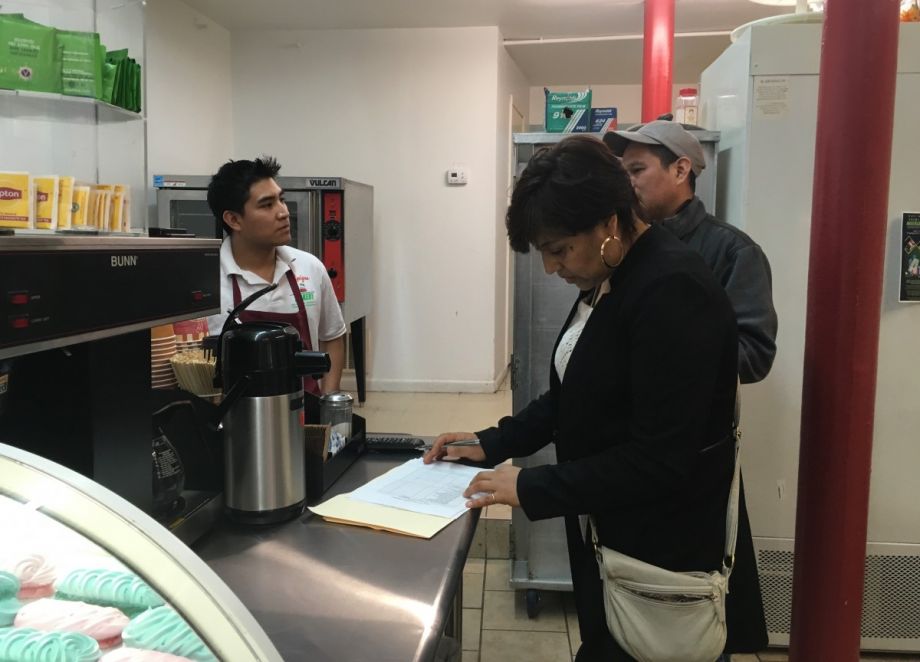 Christina Martinez (center) and Juan Carlos (right) talk with one of the owners of the recently-opened Amigos Bakery on Ninth Street in Philadelphia. (Photo by Emma Jacobs)

Juan Carlos realized a big opportunity for Philadelphia’s Mexican business community was being overlooked when, one night in early May a few years back, he noticed an unusual number of American customers at his south Philadelphia taqueria. He was puzzled by the crowd until “one customer said ‘Happy Cinco de Mayo,’” he recalled.

Carlos realized that if these customers had arrived on their own, a little encouragement could probably drum up a lot more business.

So, on a Tuesday evening in this past April, Juan Carlos, Christina Martinez and her husband Benjamin Miller of renowned restaurant South Philly Barbacoa took a walk up the blocks of Ninth Street in South Philadelphia lined with Mexican businesses.

They stopped in to speak with owners on the sidewalk or behind the counters about contributing towards organizing the neighborhood’s first Cinco de Mayo block party. The proprietors, whose businesses include restaurants, a bakery, a florist and tattoo parlor — were all receptive as Carlos and Martinez repeated their pitch. The Mexican corridor, they agreed, should try to attract some of the business going to other neighborhoods’ bars.

The event, held a few weeks later, closed the narrow street for live music, a local Aztec dance troupe and other performances. More than 400 people came out to enjoy the celebration. And, if all goes as planned, the block party was just the start of a new way of doing business for South Philadelphia’s Latino entrepreneurs. Over the next few months, Carlos and his fellow organizers will be formalizing a bid to become Philly’s first neighborhood-specific Latino business organization. Recently registered with the state as the South Philly Latino Business Community, the group, which has operated informally until now, is now preparing an application for 501c3 (nonprofit) status.

With a mission to provide “support for Philadelphia’s Latino and Spanish-speaking business community” by “educating and empowering members,” the association’s ambitions reach far beyond Cinco de Mayo. One goal Carlos has always hoped to achieve through the group is shared trash pickup services for the South Ninth Street corridor where many Latino businesses operate — a concrete step to reduce operating expenses. Workshops on topics like property ownership and business financing are also in the works as are growing partnerships with groups such as the Mexican consulate and the Hispanic Chamber of Commerce.

“We have talked about the problems we have. It’s difficult to organize ourselves,” Carlos says. By coming together as a group, solutions will be easier to come by, he hopes.

The movement comes at a pivotal moment for the Ninth Street business corridor, known as the Italian Market for the businesses predominant in this area over the last hundred years. Property values are rapidly climbing and new residential buildings are rising on surrounding blocks. On the northwest corner of Broad Street and Washington Avenue — less than six blocks from the epicenter of the Latino business corridor — construction has begun on a $100 million, 3.4-acre mixed-use development that will include a Target, a grocery store and more than 300 apartments. Another large mixed-use development is underway on the opposite side of the street. Already, market forces have pushed Carlos out of the neighborhood. Not long before the Cinco Mayo block party he helped organize, the longtime entrepreneur shut down his business on Ninth Street, Las Taquitos de Puebla, for financial reasons. Between 2012 and 2018, the market value of the building where he rented his storefront more than tripled, city property records show. Carlos plans to open a new taqueria in the lower-rent neighborhood of Point Breeze, while remaining involved with the fledgling South Philly association.

Walking north on Ninth Street from the largely Mexican blocks, older businesses with names like Talluto’s, Anastasio’s and Claudio’s seem better insulated from the changes. Mainstays of the Italian community that gave the neighborhood its name, these stores offering imported Italian goods and fresh pasta do some of the highest business volume. But the high-end apartment buildings sprouting up around the market’s edges can seem incongruous with the fruit and vegetable vendors out front on the sidewalks — who still use burning barrels for heat in the winter — or the storefront selling live poultry.

And while the Mexican section remains lively, the northern end of the market goes mostly dark in the evenings.

The new Latino business association isn’t the first organized effort to take on these challenges. In 2016, a group of neighborhood business owners proposed a Ninth Street Business Improvement District (BID) to organize things like brighter lighting in the evenings, street cleaning and night-time security. The BID, modeled after organizations in other commercial districts, including Center City, was voted down by a narrow margin of property-owners last fall.

Joe Brown was one of the votes against the BID, citing the fees involved. He said the cost would be passed onto his tenants, many of whom are immigrant-owned businesses that he believed could not afford to pay more in rent. “I try to keep my rent low. I got all my stores rented except one because our rent is reasonable,” he said. “I don’t want to lose … people.”

Brown also lobbied heavily for others to vote against the BID.

Juan Carlos, though he could not vote because he does not own property in the proposed district, was on the other side of the debate, a part of the committee advocating for the organization. Many fellow Latino business owners were locked out of the vote and disengaged with the process because of their renter status, he says. (Landlords from the Italian community still own most of the buildings, though a number of the more recent investors have addresses in Chinatown, city property records show.) Research has shown that BIDs can be “more than the purely business entity they’re typically thought to be,” reported Next City contributor Oscar Perry Abello in 2015. Abello cited a study that showed the organizations, particularly when operating in low-income, multi-ethnic urban communities, can act as a conduit for more comprehensive community development.

Other research has found recent immigrants often establish businesses in struggling business districts, often specializing in products imported from their home countries, but that they are often poorly-integrated into local planning and development.

Emilio Mignucci, owner of Di Bruno’s Bros. and one of the biggest advocates for the BID, said the rising rents and home prices in the surrounding neighborhood make it more urgent to invest in the neighborhood.

“People don’t want to shop in an eyesore,” he says. “They want a clean safe shopping district.”

“Juan Carlos is a very smart guy,” he says. “He wants the best for his Latino business community the same as we want for the whole street.”

Martinez recently took over the storefront vacated by Carlos’ taqueria. Her restaurant is called El Compadre and specializes in tortas, Mexican sandwiches. From new perch in the market, she sees new challenges emerging for the association to tackle. Soon after President Donald Trump’s inauguration in January, the neighborhood announced the cancelation of its annual Puebla festival — Puebla is the region of origin of the majority of Mexicans living in Philadelphia — because of fears that the large gathering of Mexican nationals could become a target for immigration enforcement.

“The businesses have suffered a lot,” she says, “because there aren’t a lot of Latino clients.”

This article is part of Next City’s Philly in Flux series made possible with the support of the William Penn Foundation.