A Miscellany of Buses – Next City

A Miscellany of Buses 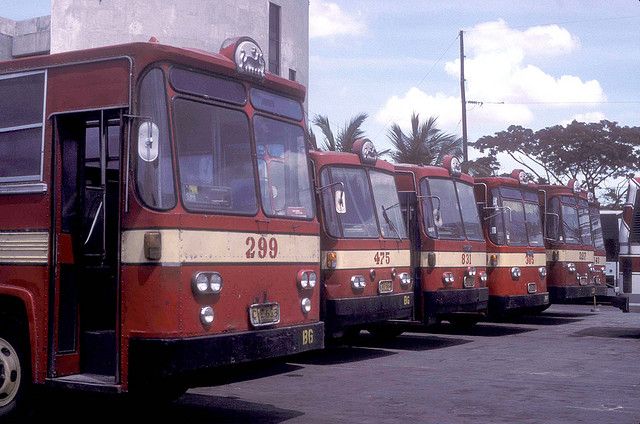 The camel and the llama, distant cousins on the same taxonomic scale, emerged from history in vastly different niches: One in the thin atmosphere of the Andes Mountains and the other on the flat desert ranges of Africa and the Middle East. The bus, similarly, has split and molded into various forms as it has spread throughout the world. Like any evolutionary creature, the bus has changed based on both its own innate qualities and limitations and the conditions of its environment.

With this week’s Forefront story featuring Mexico City’s evolving bus rapid transit system, here we take a minute to look at a partial history of bus transit in general. These four examples, in particular, show its veering evolutionary paths, and the factors — autonomy, reliability, comfort — that have shaped it.

If you look far enough back at any given technology, you begin to see that its features blend with other technologies close by on the family tree. This is the case with the Electromote, which is a mix of an electric trolley and the early horse-drawn bus. First presented to the German public in 1882 by inventor Ernst Werner Siemens (founder of the now-multinational electrical and telecommunications giant) on a 540-meter cobblestone test road, the Electromote was the first so-called trolleybus. Its carriage was bound to an overhead electrical line, but its wheels remained trackless.

It would be another 20 years before an electric trolleybus system was implemented on a commercial scale, and another half-century before becoming a prominent form of transportation. Still, the invention of the Electromote marked the beginning of a divergence which has defined the development of bus travel: Car-like autonomy versus a consistent source of energy and a set path. 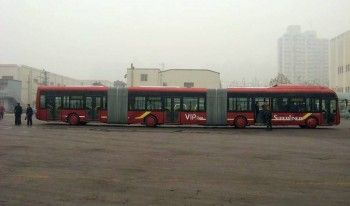 Alas, the bus would not be bound by electrical lines or tracks, but it would continue to experiment with scale and with its relationship to the street. The articulated bus, which consists of two bus segments connected by a single pivoting joint, is an example of how buses have tried to remain autonomous while also expanding their capacities.

Earlier this year, Chinese manufacturer Zhejiang Youngman unveiled the Youngman JNP62505. Touted as having the greatest capacity of any “ bi-articulated bus” ever made, it holds up to 300 passengers in three segments connected by two accordion-like joints. Even in a country where light rail and bullet trains have enjoyed heavy invested, the bus continues to evolve as China’s population grows and its network of highways expands.

As of 1943, Curitiba, Brazil had in store a similar future to most mid-century industrial cities: Dense automobile traffic along wide boulevards radiating from the center of the city. This changed in 1965 with the adoption of a new master plan that provided for the piecemeal implementation of a mass transit system. Bus rapid transit (BRT), which is a system of dedicated bus lanes and terminals designed for greater speeds and capacities, became a major feature of this plan. Now, risen BRT terminals line five of the city’s busiest arteries, while minibus routes circulate the residential and commercial streets.

Curitiba’s model has served as an example for other places, including Mexico City, seeking their own BRT systems. As opposed to the articulated bus, BRT represents an innovation in organization and infrastructure rather than in the bus itself. The bus, in this case, needed a new environment rather than the environment a new bus.

BRT systems improve bus transit by separating buses from regular automobile traffic. This is done through dedicated lanes and terminals, but it can also be done by building a new kind of bus. This, at least, is the claim of Chinese company Huashi Future Parking Equipment, whose designs show a bus that literally “straddles” regular traffic by running along tracks on either side of the road and hovering above the cars.

Whether the world will choose definitively between a new bus or a new bus system remains to be seen, but each path chosen spins out a new set of possibilities — some miscellaneous, and others that will redefine what it means to be a bus.