“A Lot of Tiny Pieces Lost” – Next City

“A Lot of Tiny Pieces Lost” 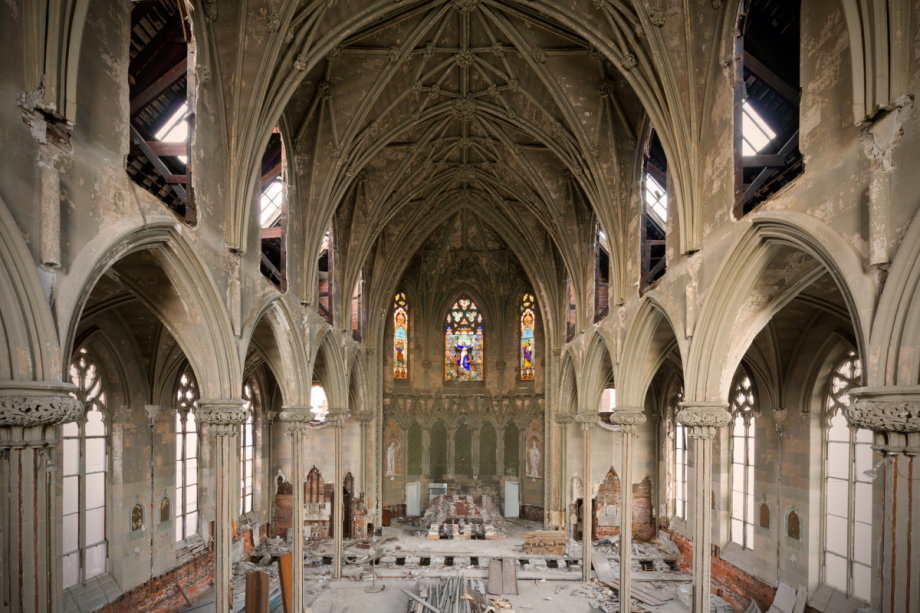 Philadelphia’s threatened Church of the Assumption. Credit: Jonathon Much, Much Photography

Zach Patten of Curbed Philly contributed to this story.

The Reclaiming Vacant Properties conference turned its eye to preservation at an afternoon session on Tuesday, with panelists exploring how shrinking cities and neighborhoods can become more desirable and healthier places to live.

Demolition versus rehabilitation was the crux of the conversation. While stressing the importance of educating the public about a neighborhood’s historic assets, the panelists made it clear that preservationists advocating for rehabilitation must convey why redevelopment is better than teardowns.

“The question isn’t, ‘what we should demolish on this block,’ but, ‘what should we be focusing our energy on?’” said Cara Bertron, director of PlaceEconomics’ Rightsizing Cities Initiative and a Next City Vanguard alum. “Long-term thinking is critical. What will this neighborhood look like in 10 years? In 20 years? If you make decisions based on what’s going to happen in the next six months, it’s just going to be a mess in six months and the city won’t be any better off.”

So what does preservation mean for older cities like Philadelphia, which is struggling with vacancy en masse?

“I think planning needs to be really micro, almost on a block-by-block basis,” said Brad White of the Advisory Council on Historic Preservation, an independent federal agency appointed by President Obama. “If you just go in and start taking out half the buildings, then all you’re doing is contributing to more blight.”

A better question might be, then, what can be done in the aftermath of scattered demolition. The gap-toothed landscape found in pockets of Philadelphia is a physical reminder of former mayor John Street’s ambitious but troubled Neighborhood Transformation Initiative. Some argue NTI lacked a cohesive rebuilding strategy, as evidenced by the many vacant lots across the city dressed up with split-rail fencing.

“Rehabilitation, when feasible, is exponentially a stronger tool,” said Emilie Evans of the Michigan Historic Preservation Network. When demolition is done without a clear plan stretching far into the future, she said, a city is left with “a lot of tiny pieces lost.”

Churches are often the most common buildings to fall. Philadelphians will remember the St. Boniface Church, a stunning Gothic brownstone that defined the neighborhood of West Kensington for 140 years before meeting the wrecking ball in 2012. Chicagoans saw the demolition of the 133-year-old St. James Catholic Church this past June, stripping the Bronzeville neighborhood of its iconic 200-foot steeple that served as a local landmark for generations.

They just don’t make buildings like those anymore. So why are we watching so many turn to rubble?

It comes down to finances and upkeep. Some buildings are in such an advanced state of decay that the economic feasibility of preservation and rehabilitation just isn’t there. While demolition may be the best course of action under certain circumstances, too much of it can make a neighborhood unstable.

Historic preservation requires a delicate balance between character and significance. Not every building deserves to be saved. Some don’t even deserve to be mothballed. The recognition and preservation of a historic building’s context within its neighborhood is the ultimate goal.

“Historic buildings are assets that relate back to who we were,” Evans said. “Detroit has lots of architecturally significant buildings, but it’s more about preserving the landscape and the topography of our neighborhoods. It relates to who we are, and it’s important to keep that identity moving forward.”

Said Bertron, “Communities compete for residents and jobs based on differentiation from other neighborhoods and cities.”

Adaptive reuse and historical preservation go hand-in-hand, as churches are commonly converted into restaurants or apartments, and industrial buildings into offices and creative workspaces. New businesses can be lured to these adaptive reuse projects, since the cost of rehabilitation is often far less than new construction — depending on each individual property — and neighborhoods stand to benefit from their inclusion in the existing walls of building.