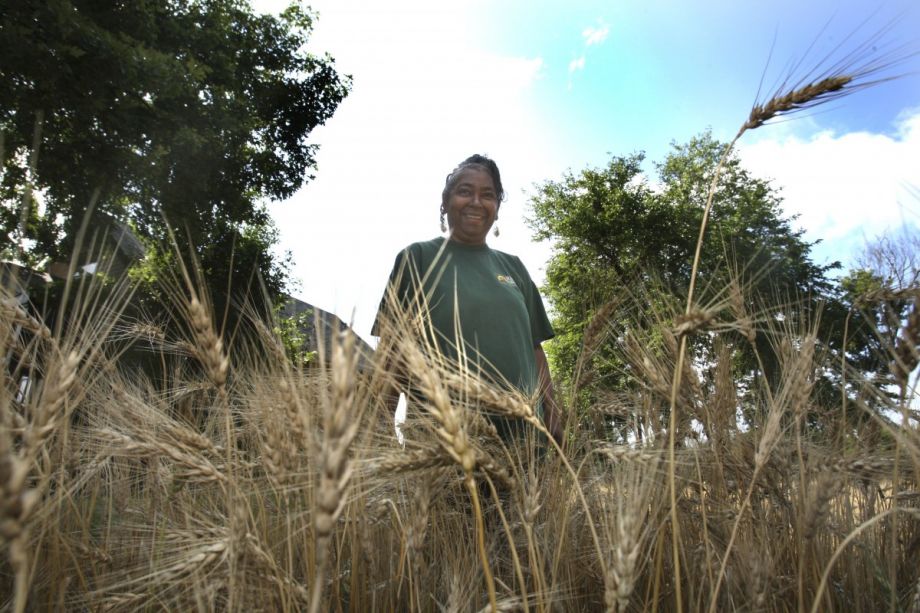 In this photo taken on Aug. 12, 2009, Carolyn Meekins stands by her wheat field on a vacant lot in Flint, Mich. (AP Photo/Carlos Osorio)

Michigan is home to one of the most diverse agriculture industries in the nation, famous for its prized Honey Crisp apples, Traverse City cherries, as well as peaches, asparagus, broccoli, and more.

Yet many medium and small farms are struggling to survive, and more than half of Michigan residents can’t access fresh food on a daily basis.

In an effort to both provide local farmers with a more steady stream of income and help local produce get into the bellies of more local residents, public health experts and advocates are making more of a concerted effort to make sure that the food supplied to these institutions come from local sources.

That’s why the Michigan Farm to Institution Network launched Cultivate Michigan in 2014. The goal at the time was ambitious: that Michigan institutions source 20 percent of their food from Michigan sources by 2020.

Cultivate Michigan is just one aspect of the Michigan Good Food Charter, published in 2010 and developed with leadership from the C.S. Mott Group for Sustainable Food Systems at Michigan State University, the Food Bank Council of Michigan and the Michigan Food Policy Council. In it were six goals to tackle during the 2010s that aimed to make it easier for residents to access locally made food and to connect Michigan farmers with more ways to keep that food in-state.

For Cultivate Michigan’s part of that overall vision, members involved in the campaign — farmers, distributors, public health figures, institutional leaders — would select four new seasonal foods each year to market and promote. Food service buyers could sign up to participate and be connected with farmers interested in selling their products to sources in Michigan. Participating institutions would report their purchases. Cultivate Michigan leadership would use that data to track progress and continue to improve relationships between the two groups.

“The overarching motivation was to provide access to healthy food to residents and support farmers and producers in order to foster strong local communities and healthy people,” says Kathryn Colasanti, a senior specialist at Michigan State’s Center for Regional Food Systems. “This campaign touches on those ideas and recognizes the important role that institutions play in providing food to people, particularly for children and schools. There are many children who may not have access to food outside of school.”

Participation in the campaign has been fledgling. To date, only 79 of the roughly 12,000 institutions — including hospitals, schools, universities, and assisted living facilities — across the state have signed up to participate.

Colasanti says it’s been difficult for institutions to keep track of their spending with Michigan sources making it hard to complete the surveys they’re given each quarter. A 2017 Cultivate Michigan data brief shows that very few institutions had returned surveys as many reported not having all of the purchase information available. Without that data, tracking whether the institutions were getting any closer to reaching their 20 percent goal has been a challenge.

Colassanti and others involved in the campaign say part of the problem that Cultivate Michigan experienced with encouraging institutions to go local is there is little financial incentive to do so. Choosing a seller that’s close to home from a small or medium-sized grower tends to be more expensive than sourcing from a much bigger grower out of state. Another key to influencing institutions is to educate them and growers alike that a local supply chain does in fact exist and letting them know how to tap into it.

Brandon Seng, co-owner of Farm to Freezer, a supplier of produce to Michigan institutions and a longtime supporter of Cultivate Michigan, says even though this initial campaign hasn’t reached its goal, it’s an important first step to begin moving the needle.

“It may have been aspirational, but it is pushing the movement forward,” says Seng.

Farm to Freezer was founded in 2013 after Seng and his wife had been handling the food service program at a Catholic school in Northern Michigan. The couple had founded the nonprofit Manistee Community Kitchen, which focuses on addressing food insecurity in the area. While at the school, they started freezing small amounts of locally grown produce to serve during the school year. They had realized that many of the students were missing out on ever trying these foods because school was out during the harvest season.

The business has gone on to focus most of its efforts on supplying produce to more than 200 institutions across Michigan. Co-owner Mark Coe works with 30-40 Michigan farmers to supply the produce, which is picked at the peak of freshness and then minimally processed and frozen so that they can be enjoyed no matter the time of year. Seng says Farm to Freezer regularly creates custom vegetable medleys for the schools the company sells to. For example, at suburban Detroit Warren Consolidated Schools, he’s created a custom parsnip bag, featuring multi-colored carrots. At Frankfort High School in Northern Michigan, Farm to Freezer has developed a custom bag of purple and yellow cauliflower to match the school’s colors.

Establishing a network of institutions that are interested in buying locally will help open doors to farmers who’ve otherwise have traditionally been left out, says Seng. The challenge, he says, has been that farmers haven’t wanted to take the risk of growing produce at the scale institutions demand if they didn’t have a way to connect with those buyers in the first place.

“Connecting growers with institutional buyers directly has been absolutely essential throughout the process,” says Seng.

And that, he hopes, is helping to get the movement started.