A Look at Seattle’s Light-Rail ‘Moon Shot’ – Next City 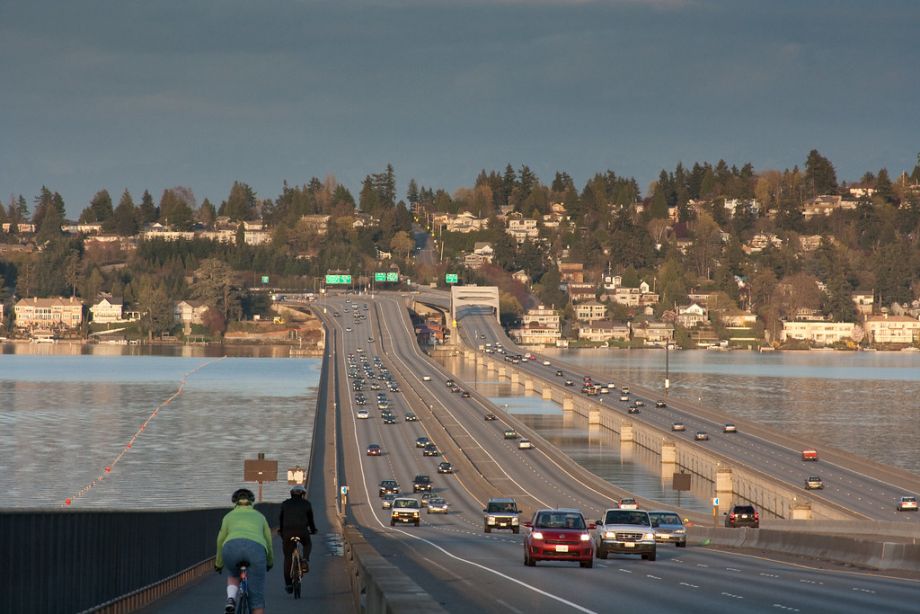 How Sound Transit Is Building Fixed Rail on a Floating Bridge

There’s a reason they call railways “fixed guideway” transit: The structures that guide vehicles along the path of a rail line cannot move. The flanged steel wheels of the trains must remain in contact with the steel rails, and if those rails slip even a millimeter out of alignment, the wheels could slip off the rails, causing a derailment.

Which is why, up until now, floating bridges have never carried train tracks. Floating bridges are subject to all sorts of forces that cause them to move, both vertically and horizontally. Winds can push them sideways, and changes in water levels and storms cause the bridges to rise and fall in response to the currents.

All this makes Sound Transit’s current East Link construction project in Seattle a groundbreaker. Or should we say a water-breaker?

A Seattle Times feature explains how Sound Transit is using an array of technical innovations in order to construct a rail line that will remain rigid across a bridge that isn’t.

The agency is finally working on installing tracks in the former center express lanes of the floating bridge that carries westbound I-90 across Lake Washington. Besides keeping the rails rigid on a bridge that moves, the engineers that designed the trackway also had to figure out how to keep the bridge buoyant after adding the weight of the tracks and the trains that will run on them. Among the strategies used to reduce weight: using cable fence instead of concrete barriers to prevent falls into the lake and using smaller, lightweight “plinths” made of a less dense concrete to anchor the rails.

To protect the bridge itself, the tracks rest on rubber pads in order to keep stray electrical current from corroding rebar inside the bridge, and the plinths are fastened to the deck with epoxy to avoid drilling bolt holes.

Then there’s the challenge of getting the rails over the hinge joints between the bridge’s fixed and floating sections. Sound Transit engineers designed eight 43-foot-long “track bridges” that carry each of the rails over each of the hinges at a height of about three feet. These curved steel platforms rest on flexible bearings that translate bridge deck movement into vertical curvature for the tracks they carry. The rails themselves are fastened to steel crossties called “bearer bars” on these mini-bridges. Wafer bearings mounted between the bearer bars and the bridge plates keep the rails fixed while the bridges move. These bearings are similar to ones used to dampen seismic motion in several large Seattle buildings, and their use will allow trains to operate across the track bridges at their normal speed of 55 mph. Other solutions would have required trains to slow down to 35 mph across the bridge.

All this took some time and cost some money: 50 months spent on final engineering (plus about ten years spent figuring out what the issues would be), $53 million on bridge redesign and an additional $225 million in construction costs, mainly to strengthen the bridge so that it will still last even after the trains start pounding it.

“It’s sort of Sound Transit’s moon shot, which is a term overused a lot this week, but it is. Nobody’s ever done this before,” said John Sleavin, the agency’s deputy executive director for design, engineering and construction management, during a July 23 media tour, the Times reported.

The East Link light metro line remains on track to open in 2023.

One of the highest-priority rail construction projects for the Los Angeles region is a line that would help ease the pressure on the traffic-choked Sepulveda Pass, one of the few routes through the Santa Monica Mountains that separate most of Los Angeles from the San Fernando Valley.

That rail line, however, might not become reality at all, if construction cost estimates released July 23 are accurate. The price tag for building the rail line, according to a report in the Los Angeles Times: $13.8 billion.

That’s the high estimate for building the line, depending on the routing and placement. The low figure, however, isn’t cheap either: $9.4 billion. Both of these figures are significantly higher than previous estimates, according to the Los Angeles County Metropolitan Transportation Authority (LA Metro).

Current plans call for this line to open in 2033, but LA Metro would like to finish it and seven others in time for the 2028 Olympic Games.

The rail line would slash peak-hour commute times through the pass. The slowest option, a monorail that would operate on an elevated viaduct over or at grade along the route of the San Diego Freeway (405 Freeway), would take riders from Van Nuys in the Valley to LA’s Westside in 26 minutes; the other three options, all of which call for at least part of the line to run in a subway tunnel, would whisk them from end to end up to 10 minutes sooner.

The higher cost estimates may not prove fatal to the line: $5.7 billion in revenues from Measure M, a sales tax increase Los Angeles County voters approved in 2016, are already earmarked for the line. But as Bob Anderson, the transportation chair of the Sherman Oaks Homeowners Association, a San Fernando Valley organization that prefers the all-subway route, told the Times, “Where are you going to get at least an extra $7 billion? Where is it going to come from?”

Some of it, LA Metro officials hope, will come from the federal government in the form of grants. Federal grants have covered as much as half the total construction cost of past projects. But even 50 percent grants would leave a gap between that $5.7 million and the cost of the all-subway option, which would build a 14.3-mile tunnel under the mountains. The option with the highest projected ridership has the line operating on an elevated viaduct from Van Nuys Metrolink station to Ventura Boulevard, then in a tunnel from there to its southern end at the Expo Line. Trains would take 19 minutes to run from end to end using this alignment.

The route includes a station at UCLA that would have the highest patronage of any non-transfer station in the Metro rail transit system.

Some options for closing that gap include congestion pricing options that could raise anywhere from $12 billion to $103 billion over a decade. But getting those approved would be politically risky.

Juan Matute, deputy director of UCLA’s Institute for Transportation Studies, told the Times that the huge travel time savings the Sepulveda Pass line promises make it a strong candidate for federal matching funds. But if the county can’t guarantee it will have its full share, he said, the project could “just keep slipping in terms of time. … We might just end up with a project that’s on the books, but the can is kicked down the road.”

LA Metro’s first move to close the funding gap will be to get suggestions from the private sector for reducing its cost while the line is still in environmental review. The agency began public hearings on the proposals July 24.

The International Railway Journal reports that a five-month project to convert an existing mainline railroad to light metro operation in the Rotterdam area will open for passenger service on Sept. 30.

Work on the Hook of Holland light metro conversion began in March 2017. Between then and now, the project has been delayed numerous times, first when asbestos and polluted soil were discovered along the route, then by construction difficulties, and finally by repeated malfunctions with the rail safety software.

The project was also extended to add two stations and take the line to Hook of Holland Beach. As several industrial spurs remain active on the route, freight trains will continue to operate on the line once it opens for passenger service. Testing of the line is underway and should wrap up in August. If the tests are successful, the Hague Metropolitan Region will shift operation of the line from ProRail to Rotterdam metro operator RET. The extension to Hook of Holland Beach will open in 2020.