Planning for a Cleaner Mexico – Next City

Planning for a Cleaner Mexico 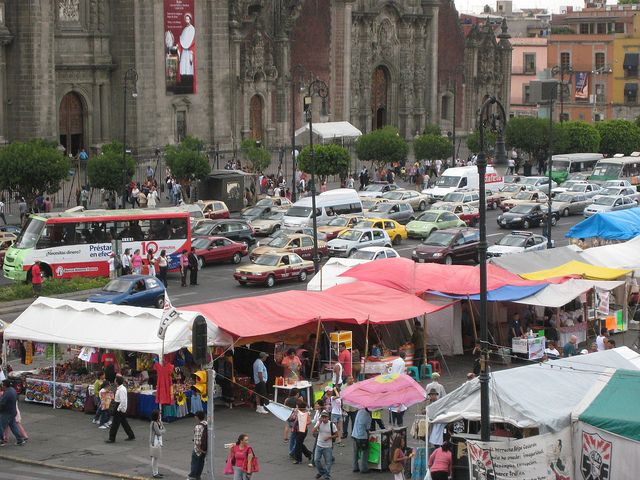 An open-air market in Mexico City. Credit: Design for Health

Mexico City doesn’t exactly bring to mind tranquil green spaces or innovative sustainability practices, and for good reason: The sprawling metropolis of nearly 21 million people not only ranks as the largest urban area on the North American continent and fifth in the world, but also as the most polluted city on the planet, according to the UN in 1992.

But that was 20 years ago. Has there been much change?

Two years ago, a report by the Washington Post found a lot of change indeed. Since 1990, a combination of federal, local and private actions have taken aim at the problem of environmental pollution, not just in the capital district of Mexico City but across the whole country. Leaded gasoline was banned, factories and refineries were removed from the city and stricter emissions standards were enacted and enforced.

However, newer environmental regulations aren’t the only policies responsible for deep declines in pollutant levels. Planning has definitely had a hand in creating a greener Mexico and Mexico City. The city now boasts the second-largest metro system on the continent with the eighth largest ridership in the world. There are plans for a twelfth line to be added as well. Mexico City has now joined the likes of London, New York and Paris with a bike share scheme. A recent project by non-profit VerdMX has unleashed massive vertical gardens across the capital city in an attempt to help scrub away not just away pollutants in the air but the hard to scrub away stigma of pollution.

The highlight of this push is Mexico City’s Plan Verde. Regaled as a possible beacon for many other Latin American cities, Plan Verde seeks to invest over $1 billion over the next 15 years into new infrastructure aimed at reducing car dependence and making Mexico City more livable, all while drastically cutting greenhouse gas emissions. (You can watch the city’s Environment Minister discuss the plan here as well as watch a short English-language TV segment on the initiative.)

In the city of Villahermosa, the capital of the oil- and natural gas-rich state of Tabasco, change has begun to come as well. A recent article by the New York Times explores how planners, civil servants and architects have begun the long and arduous process of alleviating severe pollution. For Mayor Jésus Ali of Tabasco, “the problem with Villahermosa is that it was built for the car.”

Attitudes are now changing in Mexico. While its northern neighbor is often seen as the country with car mania, Mexico too has held onto a passion for the automobile. But there seems to be some resistance to this continued love affair: In 2009, hundreds of Mexico City residents cycled naked through the city to protest the automobile’s dominance.

Sprawl, population and car use continue to grow, however. Planners, activists and government officials have their hands filled, but if a city once regarded as the most polluted city in the world can make this many changes, there is surely the possibility of change for any other city in the world.