A Giveaway to D.C. United Won’t Benefit the District’s Urban Fabric – Next City 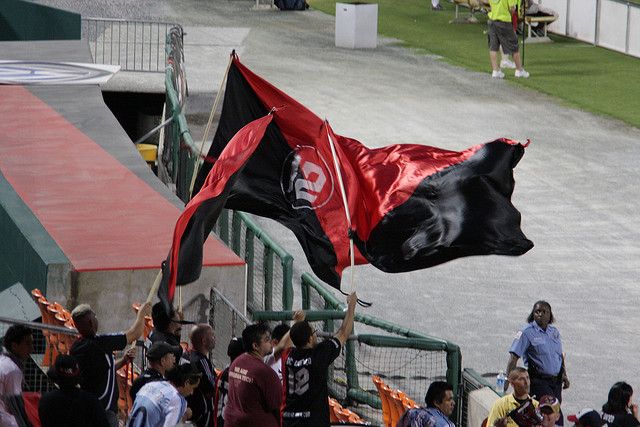 Did you know that Washington, D.C.’s pro soccer team is the winningest team in the nation’s capital? D.C. United has won more championships since its founding in 1996 than any of the city’s other major sports teams over the last 20-plus years. And now it wants to build a new stadium, and unlike most other major sports teams, it even plans to pay for the stadium — the stadium, that is, but not the land. It wants the city to give it the land. And to set up the “infrastructure” for the team. And, also, by the way… the land United wants? The city doesn’t own it.

The team is looking at a neighborhood called Buzzard Point, in Southwest D.C. Pepco, the electrical utility, holds about half of the land the team wants. A developer has purchased most of the rest as an investment. Matt Yglesias at Slate thinks an incentive for more affordable housing might make more sense:

[In] a city whose politicians claim to be obsessed with affordable housing, it’s a bit odd. If the city’s willing to invest in new transportation infrastructure and doesn’t think industrial or quasi-industrial uses of this land are important, why not offer up some infrastructure to encourage developers to build some houses?

Probably because affordable housing doesn’t have thousands of affluent fans demanding it. That said, Next City views public subsidies of stadium deals with skepticism: Not only do they consistently fail to pay for themselves in economic growth or tax revenue (more on that), but they don’t even pay off in prestige. If D.C. ends up buying the land — or orchestrating some byzantine “deal” that effectively amounts to buying the land — it won’t be for jobs or tax revenue. City administrators will do it because they know that if D.C. doesn’t, a nearby city will.

But could Buzzard Point be just the site where a team can’t help but build in a way that complements the city, like older stadiums? Cavan Wilk, at the local urbanism and development blog Greater Greater Washington, thinks so. Wilk has six criteria for sports stadiums that benefit cities: No surface parking, proximate transit access, pedestrian-friendly connections to transit, frequency of events and a vibrant surrounding urban area. He says it meets all six.

But saying that Buzzard Point has transit access is a stretch. Should the United stadium get built, its 24,000 seats would be located a little less than a mile from two Metro stations. What might be a 15-minute walk for an urbanite on the go is much longer, in a crowd, on game day. Twenty minutes is a long walk for out-of-towners, groups, older folks and tipsy people (though there is talk of a streetcar to the neighborhood).

And “vibrant” Buzzard Point is not, but Wilk hopes it will be. One can imagine a scenario in which, with thousands of people walking through the neighborhood, dozens of nights each year, a whole new urban corridor could form. This vision doesn’t, however, gel with the reality of modern stadiums. These mini-cities have a way of protecting themselves from losing revenue to neighboring businesses, and they do this using parking lots. Wilk’s analysis that most visitors will come via Metro lines only stands up if you believe there won’t be more parking.

Which leads me to my strongest objection to Wilk’s argument, where he writes:

Parking garages are extremely expensive… Buzzard Point [doesn’t] have the space for acres of RFK-style surface parking. Without any government support in the form of road building or eminent domain, it wouldn’t make fiscal sense for DC United’s ownership to spend lots of its own money on parking structures… [as the site is] proximate to Metro stations.

Hold on. My take on the site sees two decent stretches that would be both ideal places for surface lots and horrible places to put them. First, to the east, along the long stretch of used and abused waterfront. Second, and even more likely, to the north, along Q Street and Potomac Avenue SW. This land currently appears to be mostly in light industrial use, but connecting the Nationals stadium and the United site as it does, the two teams will salivate to turn it into a small sea of shared surface parking. Particularly with South Capitol Street running right along there, connecting I-295 just to the south with I-395 a bit to the north. Deals will be made. Property will change hands. Designed right, those parking lots could do a great job of funneling fans straight into the stadiums so they do all their spending there and never even see the community just to the north.

For everyone’s hopes as to what a sports stadium might do for its neighbors, remember that the modern stadium isn’t like a restaurant that wants the nearby movie theater to do well because moviegoers buy dinner and drinks. A sports stadium wants to be your movie, your dinner, your drinks and your souvenir shop. What incentive does the team have to stimulate nearby neighborhoods? None, in fact, as its incentive is to use its campus design to keep guests focused as much on what the stadium has to offer as possible. Keep in mind, one of the reasons that United wants to leave its current home, Robert F. Kennedy Memorial Stadium, is because it isn’t making money on concessions there.

The Washington Post has made the best map of the proposed site, showing who owns which pieces of land. 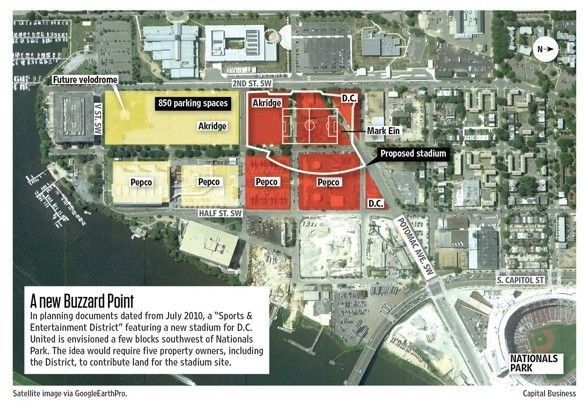 If you look in the lower right corner (which is really the northeast corner), note that the new stadium would be close to Washington Nationals Park. Conveniently concentrated stadiums don’t make stronger neighborhoods. Look at South Philadelphia, with game sites for the 76ers, the Eagles and the Phillies all floating near each other in a giant sea of occasionally lucrative parking and year-round polluted runoff. The only ripple effect to reach residents from those stadiums is traffic jams.

The best hope for the stadium to spur commercial development in the area will come from pedestrians making their way there from its two Green Line Metro stops. The walk from the Navy Yard stop is surrounded on either side by the Nationals stadium and Nationals stuff, so not much hope for those pedestrians spurring on a new commercial corridor. In a perfect world, though, pedestrians on their way from the Waterfront stop will largely go through a residential neighborhood. Which means one could hope that this foot traffic could do the neighborhood some good.

The area along the way has a population density that is much lower than that of bustling Northwest D.C. It is also predominantly public or publicly financed housing. It’s a neighborhood that could do with some cause for hope. With some rezoning and investing, the existing affordable housing stock there could be expanded, while adding commercial space at ground level to make homes for the sort of sports bars and memorabilia shops that give Wrigleyville, in Chicago, its unforgettable feel.

But that will only happen if the city makes the team design its campus so it opens up to the community. It won’t happen if the team joins with the Nationals to hide the neighborhood from fans with parking.

Waterfront proximity is the most striking feature of the area. Though two gigantic, cubic office buildings block much of the view, there’s still considerable room for more public access to the Anacostia River, ideal for pre-game barbecues, more informal athletic activities or even a boardwalk. After all, the best use for a waterfront (or any urban space) is many uses.

We know very little about the current structure of the deal that’s on the table, other than the fact that D.C. United has told reporters that it’s getting impatient and talking to folks in Maryland. Calls to the team and to the Office of the City Administrator met with no response. Pepco, also party to the talks, responded with the same written statement found in other media accounts.

With so many parties at the table, the deal that comes out could be very complex, so it’s important for those watching to remember that whether it’s a land swap, tax abatement, below-market lease or loan, a giveaway is a giveaway in the eyes of an accountant. The Verizon Center likes to tout the fact that it was constructed entirely with private financing, but it still got $100 million in help from the city.

The Washington Nationals started at RFK, too, and then won perhaps the most heavily subsidized and lucrative stadium deal at that point in history. However, that very fact should give District Mayor Vincent Gray cover to say that the city can’t afford another giveaway to another team — even to the point of letting D.C. United go to Maryland, if it comes to that. If United really won’t stay without a handout, then the city loses out whether it stays or goes. The only way the city can possibly gain in this scenario is by refusing to give in and buy the land for the United.

If Gray is negotiating now because he doesn’t want to be the mayor that lost the soccer team, maybe he should look at it another way. If he is worried about legacy, being the mayor who wouldn’t bend to blackmail isn’t a bad one.