A Font for Chattanooga. But Not for You. – Next City

A Font for Chattanooga. But Not for You. 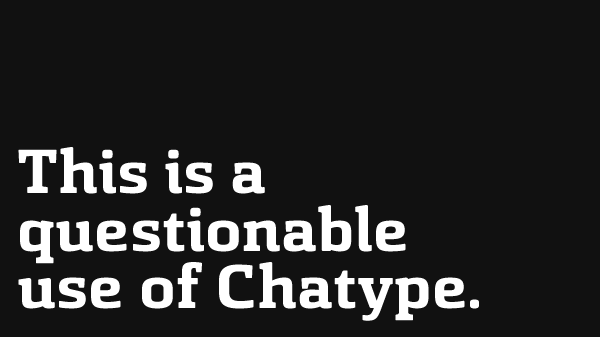 Over on Atlantic Cities, designer Steven Heller has the backstory on Chatype, which is now Chattanooga’s official typeface, having gotten its start as a Kickstarter campaign. By all accounts, that Tennessee city of 170,000 is the first in the United States to be able to claim its very own font. It’s already up on the public library.

But there are also some interesting particulars of how, exactly, Chatype is being rolled out in the world. Local brand designers Jonathan Mansfield and D.J. Trischler worked with local typographers Jeremy Dooley and Robbie De Villiers to create Chatype, a serif typeface that manages to be both beefy and playful all at once. Their dream is for Chatype to be a civic signifier for their city, a sort of gang sign of fonts. Or as they put it, “a type unto ourselves.”

Achieving that, as they see it, requires keeping Chatype local by limiting its use. The designers, who are retaining all rights to the typeface, have put together what they’ve called an End User License Agreement Video; the link to downloading the font only appears at its end. In the video, Mansfield explains that, “Chatype is really for Chattanoogans, for Chattanooga. It’s for people here that are doing things oriented around Chattanooga, but also for Chattanoogans from afar that want to kind of promote their city.&quot.

Dooley adds that the font is a way of pulling together disparate groups “that still want to be associated with Chattanooga, and they want that association to be immediately apparent.” And Trischler boils it down: “We want to see Chatype everywhere. We want you to use it, and have fun with it.”

Fun, but with limits. They really prefer that Chatype not be used in company logos, in political campaigns, or by anyone outside Chattanooga, unless they’re working on something Chattanooga specific.

For this reason, says Dooley, he and De Villiers have chosen to keep all rights to the font. “That really is the entire premise of this end user license agreement,” he says. “If we simply released this as an open source license, it would be available to everybody from Seattle to Timbuktu. But because we want to maintain its geographic exclusivity, Robbie and I need to maintain our rights as we designed it.” As happy music plays, he adds, “We’re releasing it completely for free. And there’s no nefarious conspiracy down the road were all of the sudden we’re going to start charging for it. It’s available to Fortune 500 companies and also small startups.” But they need to maintain those rights, “in order to have these geographic restrictions be legally binding.”

Digital fonts can indeed be rights-restricted, and creators can maintain some rights while giving away others; that’s the basis for Creative Commons. But for you lawyers wondering how you write a EULA to capture terms like those, you’ll have to keep wondering. There’s no actual license terms in Chatype’s download file, which means that would-be users of the Chattanoogan font are left to figure out for themselves whether they’re abiding by the spirit of Chatype.