A Fix For Tokyo’s Oldest, Densest, Most Disaster-Prone Neighborhoods – Next City

A Fix For Tokyo’s Oldest, Densest, Most Disaster-Prone Neighborhoods 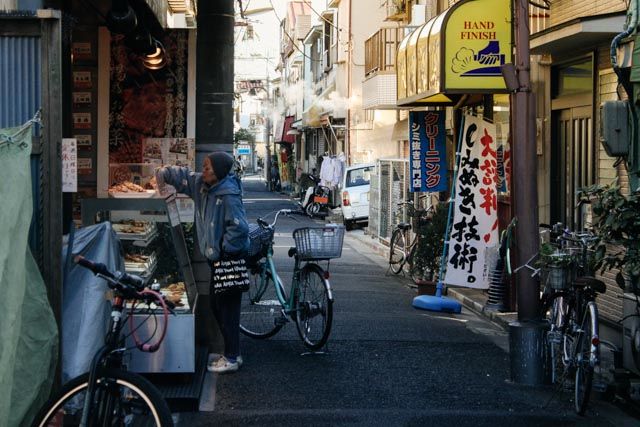 In some of Tokyo’s older neighborhoods streets are no more than two meters wide, making access during an emergency difficult. Photo credit: Guwashi999 via Flickr

“Tokyo is a great metropolis that seems to have lost the face of its own past,” writes Jinnai Hidenobu, referring to the fact that almost none of Tokyo’s homes are over 100 years old. In fact, of Tokyo’s nearly six million homes, only around 66,000 were built before 1950 (about one percent), according to the 2008 Housing and Land Survey.

This is largely because the the city was twice reduced to “smoldering ruins,” writes Hidenobu in his 1985 book Tokyo: A Spatial Anthropology, first by the 1923 earthquake and later by the Allied forces’ firebombing of the inner city during World War II. Only a few areas of Tokyo survived these two formative disasters, and these are where some of the oldest of those 66,000 homes are located.

A narrow, but lively laneway in Kyojima, Sumida Ward.

Known as mokuzō jūtaku misshū chiiki – which inelegantly translates as “area of densely packed, old wooden houses” – these places have been a high priority for the Tokyo Metropolitan Government’s (TMG) disaster prevention efforts since as early as 1971. Highly flammable and easily collapsable, these sections of the city are apt to have the highest number of deaths in an earthquake.

The TMG has had incredible difficulty preparing these areas adequately for disaster. A government survey in 1997 found that mokuzō jūtaku misshū chiiki comprised about 60,000 acres of Tokyo. In 2012, that area had shrunk to about 40,000 acres, and will shrink even further over the next ten years. In April 2012, the TMG specifically targeted these areas in its wider plan to create a city that is “unbreakable and unburnable” by 2020. Part of the plan will be devoted to “Increasing Fire-Resistance of Districts with Close-Set Wooden Houses.”

Inhabitants in one of Sumida Ward’s areas of densely packed, old wooden houses.

There’s ample reason for concern. The mokuzō jūtaku misshū chiiki are at risk for multiple disasters. For instance, the TMG predicts there’s a 70 percent chance that a 7.3 magnitude earthquake will hit Tokyo in the next 30 years. In the government’s scenario, most of the old wooden houses will collapse and burn. (The majority of deaths during the 1995 Kobe Earthquake were in the districts of densely packed wooden houses.) These disasters would be compounded by the narrow roads limiting access for emergency services, in some cases making entering altogether impossible – roads in certain spots are less than two meters wide. In addition to earthquakes a number of areas in Sumida-Ku (an eastern ward of Tokyo with a number of mokuzō jūtaku misshū chiiki) are below sea level, leaving these old homes exposed to storm surges, flooding and tsunamis from nearby rivers.

The first plan to prevent these kinds of disasters came in 1971 when the TMG planned to demolish the most disaster-prone mokuzō jūtaku misshū chiiki and replace them with high-rise apartments and parkland. Community groups resisted the development, and by 1974 the plan was abandoned, thanks in part to a growing awareness of the value of this type of tightly knit, dense urban form.

Taking a walk through one of these “high risk” areas is like taking a walk back in time. The two-story houses are constructed ad hoc, from bits of wood and corrugated tin. Built as unregulated subdivisions laid over farmland during the 1920s and ’30s, the houses are so close together that you can reach through a second-story window and shake hands with your neighbor. The design is a legacy of Tokyo’s informal patchwork style of urban development, and is similar to the way many developing-world cities are growing today. 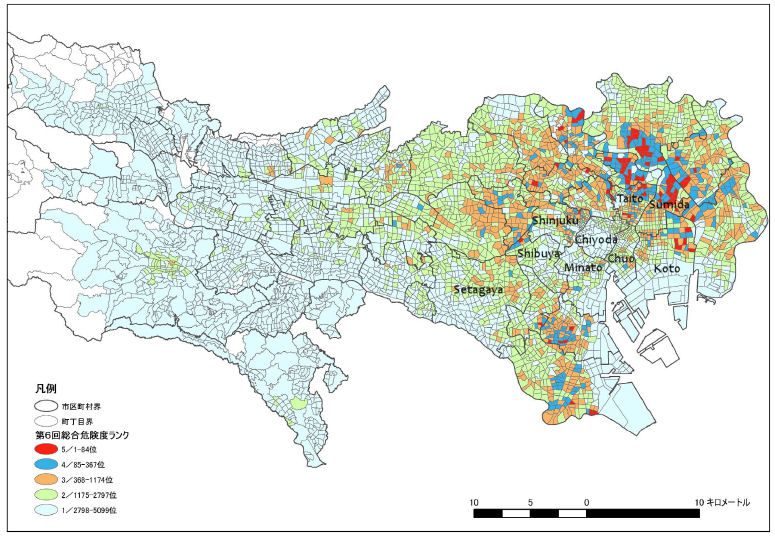 To preserve the spirit of that style, the government proposed a new development model in 1981 that embraces the step-by-step evolution that created modern Tokyo. The problem is, that incremental change has been incredibly slow. Road widening can take years, or even a decade as in one case in Higashi-Ikebukero, where 153 meters of road were widened from two meters to six meters over ten years.

Despite subsidies from the TMG, retrofitting or rebuilding is not only expensive, but time consuming and highly disruptive to elderly residents. Due to these costs, some residents have embarked on do-it-yourself seismic retrofits of their homes. Daiki Goto, a 34-year-old resident of Sumida-Ku, lives in an 80-year-old wooden house retrofitted with steel braces and wooden support beams at a fraction of the cost to professional secure his home for an earthquake.

Kenji Iwamoto, the sub-section chief of Sumida Ward’s Disaster Prevention Division, explains the government-approved methods for disaster prevention in the mokuzō jūtaku misshū chiiki. There have been a number of approaches over the past decade, from training over 160 community disaster prevention leaders, widening roads, offering subsidies for seismic retrofits and reclaiming empty lots for pocket parks and emergency evacuation areas. This is significant progress, but in April 2012, the TMG embarked on a new plan for these areas, a 10-year project with the goal of significantly rebuilding them and widening their roads. They may have a budget of around 170 million yen ($2.18 million), but three decades of inefficacy makes the noble goals of the project questionable.

Before-and-after image of how the TMG plans to break up large areas of low-rise housing with apartment blocks, wider roads and parks. Source: Ministry of Land, Infrastructure, Transport and Tourism

Rebuilding means relinquishing property and pushing back the boundaries of rebuilt homes by up to two meters (the improved roads must be at least four meters wide). Space is limited as it is, and without any reimbursement it’s difficult to convince affected residents to go through the disruption, regardless of whether it might make their neighborhood safer.

The mokuzō jūtaku misshū chiiki issue in Tokyo is an example of how cultural attitudes and misplaced nostalgia can stymie disaster prevention. Even Kenji Iwamoto is sympathetic. “I love the feeling there,” he says. “You feel like you’re really in old Tokyo.” But, he adds, “Of course, now I can’t help but see the dangers.”

The disaster risks are clear and solutions are bogged down by a confusing system of property ownership, elderly residents with health or social problems and a lingering desire to maintain the character of these older areas, which are seen as a surviving symbol of Edo, the old name for Tokyo, when the city grew to become the largest in Japan. In 1985 Hidenobu wrote that he lamented the loss of these “tenement lined backstreets” due to “traffic regulations…fire prevention.” He wasn’t the first or the last to do so.