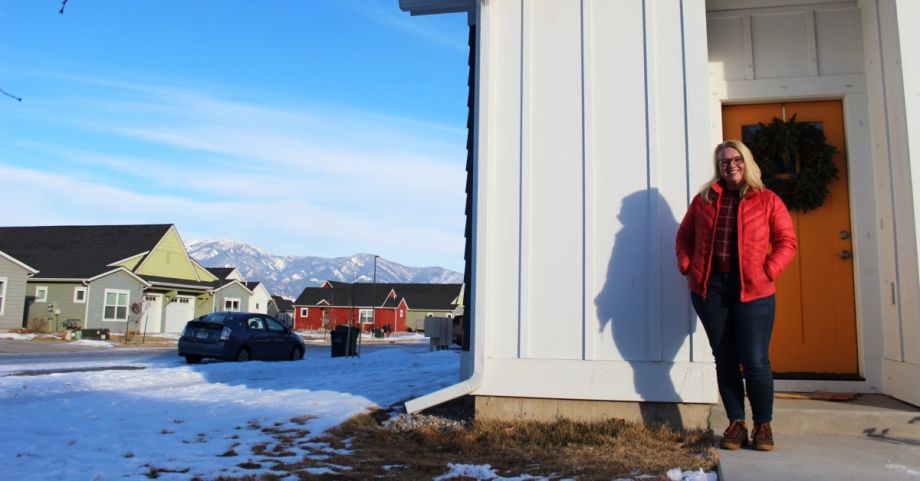 Kyla Tengdin and her husband purchased their Bozeman home through the city's inclusionary zoning policy. She says she would not have been able to afford it at market-rate. (Photo by Greg Scruggs)

When Kyla Tengdin gives directions to her Bozeman home, she warns visitors not to trust Google Maps. The West Winds neighborhood where she lives is so new that her street address doesn’t populate on the GPS app. Cruising the freshly paved asphalt of a subdivision in its infancy, work trucks advertising heating and cooling, electrical, and property inspection far outnumber family cars. The midday soundtrack is provided by the din of construction crews hammering on rooftops and the snap of building wrap flapping in the wind.

Two generously-sized model homes beckon at the entrance where builder Williams Homes advertises three-bedroom floor plans starting at $500,000 and edging into the mid-$600,000 range. These price tags are commensurate with Bozeman’s soaring single-family home prices, which have marched steadily upward for the better part of the 2010s only to rocket to a 20% year-over-year increase in 2020.

Anecdotal evidence suggests an influx of newcomers to Bozeman and surrounding Gallatin County seeking larger houses near outdoor amenities — the snow-capped Bridger Range is visible from the sidewalk — and fleeing bigger cities following civil unrest during racial justice protests, all abetted by remote work opportunities that allow them to bring their metropolitan salaries to cheaper housing markets. Buoyed by these trends, Bozeman was ranked the fastest growing micropolitan area in the U.S. in 2020 for the fourth year in a row.

“Going into the pandemic we were feeling the growth quite a bit and the throttle was all the way down,” says the city’s community development director, Marty Matsen. “When the pandemic hit, we thought that surely this will cause some slowdown or at least a little bit of breathing room. Just the opposite happened and we have been in non-stop reactionary mode [ever since].”

But Tengdin doesn’t fit any of these trends. She moved to Bozeman in 2015 to follow her then boyfriend, now husband, who was studying at Montana State University. He is a public school teacher commuting 60 miles round-trip over a mountain pass to a neighboring county and hoping to find a teaching job closer to home in Gallatin County. She works for a local educational non-profit. A new house in West Winds is far beyond their price range.

“Most anyone who works for a job that’s here in Gallatin County is not going to be able to afford the average home in Gallatin County,” says Tengdin while sitting in the backyard of the two-bedroom, one-bathroom, 970-square-foot home she and her husband share with two rambunctious dogs. Next door, a two-story house that’s twice as large looms overhead.

“The only people who can afford houses like the one next to me are people who are coming from elsewhere,” she said.

The Tengdins paid $217,000 for their modest but comfortable home with enough room for a cabinet to display her husband’s grandmother’s German china. The house next door fetched over $500,000 from a couple, Tengdin says, who relocated from the East Coast and brought their federal government jobs with them.

Unlike larger metropolitan areas, the region lacks more sophisticated tools like a housing trust fund, annual funding rounds, housing levies or bonds, or an ecosystem of affordable housing developers. What Bozeman does have is a mandatory inclusionary zoning policy.

The Tengdins scored their home thanks to that policy, which requires any new development of at least 10 lots to sell 10% of the units at a reduced price for households earning up to 80% of area median income. They also received $40,000 in down payment assistance from the City of Bozeman and the Human Resources Development Council (HRDC), the county’s jack-of-all-trades social services organization that offers everything from homeownership classes to aspiring couples like the Tengdins to warming shelters for the county’s growing homeless population.

But that policy is likely on the chopping block. In mid-February, the Montana House of Representatives approved a bill that would preempt local governments and restrict their ability to mandate inclusionary zoning.

The move is a setback for cities like Bozeman that are grappling with rapid growth and its unintended consequences for housing markets. “Inclusionary zoning is a big deal,” says Matsen. “It is one of our only regulatory tools to force the issue.”

Matsen estimates that local builders would add about 35 deed-restricted homes to the city’s affordable housing supply annually under the ordinance, though only 17 homes have been built thus far according to the city’s Community Housing Dashboard. For Linda Revenaugh, executive officer of the Southwest Montana Building Industry Association, which has lobbied for the state preemption, losing that supply is not a significant loss.

“It just doesn’t seem like enough and it doesn’t seem like it’s working out for them,” Revenaugh says. The city’s 2019 housing needs assessment projected that Bozeman must build an additional 6,000 homes by 2025 with 60% priced below market rate.

Revenaugh argues that homebuilders provided low-to-moderate income options prior to the inclusionary zoning ordinance’s approval, but those units were not tallied as part of the city’s affordable housing stock because they were not sold to income-restricted clients.

An influx of newcomers to Bozeman are being drawn by a walkable downtown and low (but rapidly rising) housing prices. (Photo by Holly Hayes / CC BY-NC 2.0)

The builders association believes that an inclusionary zoning mandate forces their industry to shoulder a disproportionate cost to provide subsidized housing. “It’s a fabulous program, but if we are going to talk about affordable housing, it is definitely a community-wide issue,” she says.

Bozeman has managed to pump about $350,000 per year of general property tax revenue into housing assistance like the kind that the Tengdins received, but the amount is a drop in the bucket compared to the need. Without those tools, Matsen said, “There just is no more public funding coming our way.”

The state legislature’s move is a setback for affordable housing advocates struggling to negotiate a difficult middle ground. Bozeman is too big to levy a resort tax like nearby Big Sky, Gardiner, and West Yellowstone. It’s also the only city in Montana too big to qualify for USDA’s rural housing assistance programs while still being too small to qualify for HUD’s Community Development Block Grants as an entitlement community. However, they are likely to qualify going forward after the 2020 Census results are tallied and Bozeman officially exceeds 50,000 in population, thus tipping the scales from micropolitan to metropolitan.

That conundrum leaves Bozeman banking on the YIMBY approach. Can the city build its way out of the newfound housing crunch? “I sure hope we can,” Matsen says, rattling off the city’s relatively relaxed zoning code for the Intermountain West and highlighting how his office has been working at warp speed to approve housing permits — though, he admits wryly, five of the city’s eight building inspector positions are vacant. Prospective candidates for a job that pays in the low $50,000 to mid $60,000 range are scared off by the high housing prices.

“I don’t know if Bozeman can build their way out of this,” Revenaugh says. “Our members are willing to try.”

Back in West Winds, Kyla Tengdin loves her house but harbors no illusions about its fate should she and her partner move on.

“I’m sure if we ever outgrow this house and have to sell it, it will become a vacation home or maybe a college rental,” she says. “I don’t think anyone who can afford to buy this house at market rate wants to live here.”

Editor’s note: This article originally gave the incorrect name for the Bridger Range.