A Commons for All: Vanguard Newark’s Big Idea Challenge 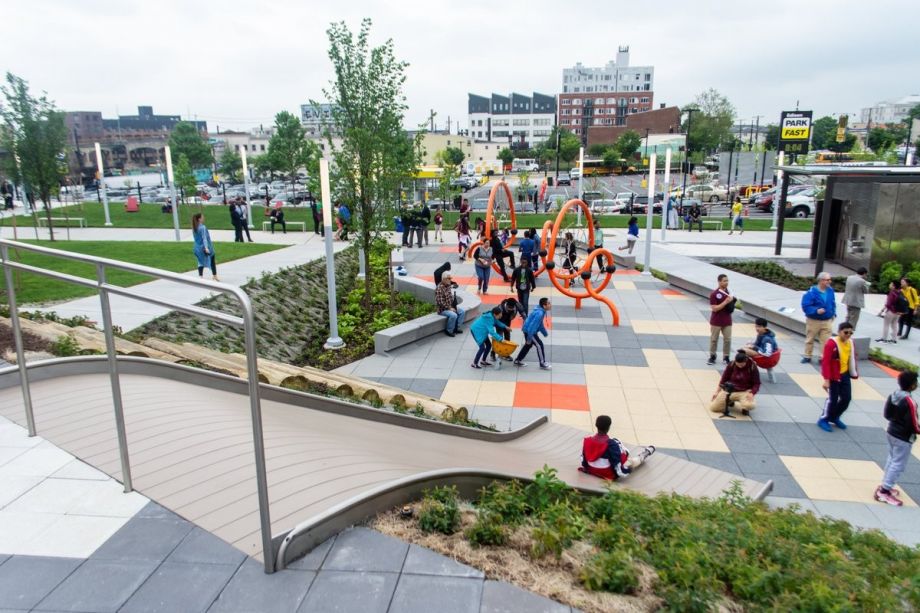 The opening of 3-acre Mulberry Commons Park in May 2019, makes a prettier, greener stroll for visitors walking from Newark’s Penn Station to the nearby Prudential Center arena for a concert or game. The public space is a piece of a larger 22-acre development project intended to add commercial and residential space to Newark’s core. But city leaders say they also want the park to be a true commons for all Newarkers, even those who live miles from that center.

With that goal in mind, the Big Idea Challenge (BIC) at Next City’s Vanguard Newark conference in June 2019 asked 42 fellows from around the region to work with community partners in the city on plans to activate the new park in ways that will draw all residents to the space.

“As the downtown grows, we want to make sure we grow intentionally and inclusively to benefit the entire city as one, and we understand that not everyone in the city feels like they are being included in some of these decisions. Or when they see new buildings come up, they don’t necessarily feel like [those buildings are] for them,” said Jorge Santos, of Newark Alliance, an economic revitalization nonprofit and Vanguard host. “With Mulberry Commons … we want to ensure the entire city, every person from every neighborhood feels like they’re welcome there, feels like there’s something there for them — to bring your family, your friends to show off and [that] it’s not just for people who live and work in downtown.”

Each of the six BIC teams approached their Mulberry Commons activations through a specific lens: Cultural Preservation, Safe and Healthy Neighborhoods, Transportation, Economic Development, Housing Affordability and Homelessness, and Sustainability. The competitors had 10 minutes to present a park programming idea and a related city policy recommendation at a public event on Saturday, June 29, at the New Jersey Institute of Technology. At the end of the presentations, judges announced one winning team: the cultural preservation group.

A rendering of the Cultural Preservation team's storytelling portal, which features glass panels telling the site's history along the main walkway of Mulberry Commons. (Illustration by Devin Fields)

One judge, Linda Morgan, a vice president at RBH Group, a social impact real estate developer in Newark, said the winning team stood out for their efforts to understand the city’s character and history and for offering both short-term and long-term solutions.

The cultural preservation team envisioned Mulberry Commons as a public space “that centers and acknowledges present and historical lived experiences” through storytelling and entrepreneurship. For the first, they suggested starting with informal gathering space in the park to foster community connections, with a longer-term goal to add a permanent storytelling kiosk. Likewise, local vendors could be organized to sell goods at pop-up markets, with an eye toward establishing a more permanent marketplace (that included entrepreneur technical support) in the future.

Both ideas acknowledged the fact that the park’s location was home to a thriving Chinatown, from the 1870s until the 1970s, and also a popular outdoor shopping arcade. “Our group recognized the parallels between the Chinese then and black people who have been living in Newark for decades,” Vanguard Jessica Debrah, a program associate at the Victoria Foundation in Newark, said. “Through art, design, architecture and color, we highlight and center the stories of past and current residents, and provide economic opportunities and social interactions.”

The team designed their “storytelling portal” in detail: Chinese wisteria would grow over a pergola-style structure, and the site’s historical narrative, with images, would present on panels of glass that lined the park’s main walkway. These transparent panels, which use the existing landscape as a backdrop, would allow patrons who stroll the walkway to simultaneously experience the site “then and now.” Debrah said the team approached this challenge with a shared perspective of creating a space of “joy, imagination, empowerment and acknowledgment.”

Morgan said the judges saw possibilities for how the other teams’ programs and policies could be layered into the cultural preservation team’s winning plan.

“What’s important to me is making sure that the work Next City Vanguard fellows did is not lost, but rather we bring together stakeholders around the ideas we heard today to try to take it to the next level of implementation,” Morgan said, after judging was complete.

Other teams’ ideas included bringing a piece of Mulberry Commons to the city’s neighborhoods by building “green canopy” satellites in all five wards to promote sustainability; conducting health screenings in the park; installing a kiosk where residents could learn about testing air and water quality; establishing colorful wayfinding to draw residents to the space; inviting a temporary shipping container installation for bike repair and cycling lessons; bringing in a mobile shower and laundry bus for people experiencing homelessness; and launching a market cooperative owned and controlled by vendors from across the city.

“We’ve heard that so much of wealth that Newark has leaves the city,” Vanguard Anh-Thu Nguyen said during the economic development team’s presentation on the co-op concept. She refers to the fact that many workers at big downtown corporations live outside the city. (According to the New Jersey Institute for Social Justice, only about 18 percent of jobs in Newark are held by locals.) “We want to center business here in perpetuity.”

The housing team called attention to illustrative numbers. In Newark, 78 percent of households are renters, 60 percent of those are rent-burdened, and 70 percent of rent-regulated apartments aren’t registered with the municipal clerk’s office. They proposed “Newark HomeLink,” an online housing support tool modeled on a similar one operating in New York City. The Vanguards acknowledged such a system is a “heavy lift,” but suggested that the growing tech industry in Newark could be tapped to design and build it.

“It all came down to access, to opportunity, to inclusion, and whether [the lens was] transport or homelessness, that thread was woven through,” said Esther Fraser, of Rising Tide Capital, an entrepreneurial development nonprofit and a Vanguard Newark sponsor, at the BIC event. “All placemaking has to start with the people who live in the community. And just seeing that was recognized in a very visceral way today was really impressive.”

Even though there was only one official BIC winner that day, Angela Garretson, NJIT’s chief external affairs officer, recognized that every team’s ideas were “adaptable and doable,” and said the Challenge underscores why NJIT wanted to be a Vanguard Newark sponsor.

“We were so thrilled because we know how much of an impact these individuals can have, not only on local communities but how we can help tell our story nationally and internationally,” Garretson said. “NJIT is all about innovation and making sure we can support the folks who are really doing entrepreneurship, innovation, and community impact. This is the best of all three worlds.”