A Chicago Jail Becomes a Polling Place – Next City 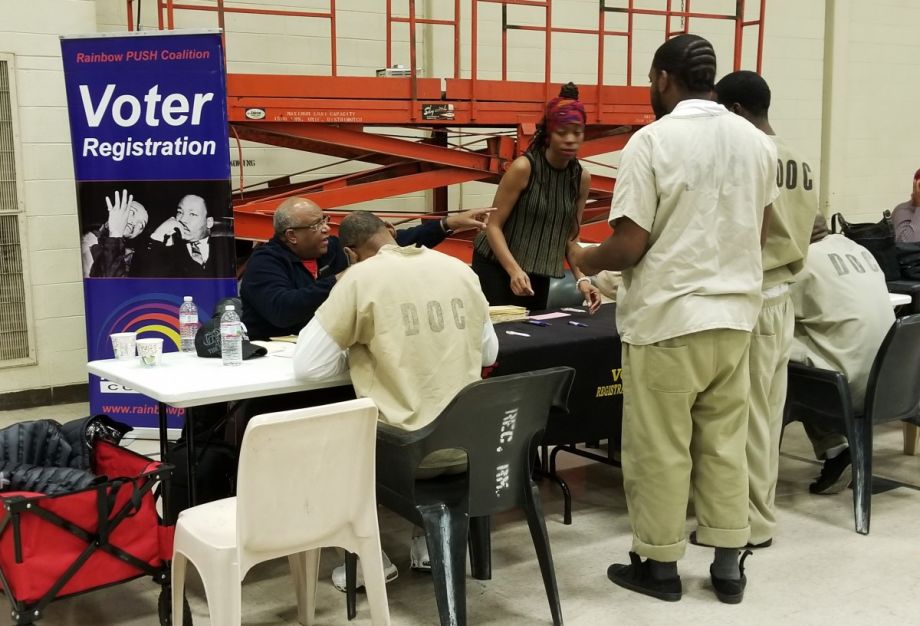 Inmates at Cook County Jail register to vote during Christmas Day services hosted by the Rev Jesse Jackson in Chicago, Monday, Dec. 25, 2017. A new pair of laws establishes the jail as not just a voter registration site but a polling place, so that people in pre-trial detention can vote. (AP Photo/Sophia Tareen)

The House bill, which goes into effect in January 2020, establishes a peer education program that provides citizens re-entering society from the criminal justice system with non-partisan civics information within 12 months of their discharge. The Senate bill immediately establishes the jail as a polling place, mandates local election officials to allow those awaiting trial in custody to cast their ballot, and directs the Illinois Department of Corrections and county jails to provide everyone in custody with information about their voting rights.

The goal is for the polling infrastructure to be up and running by March of 2020, just in time for the upcoming election.

“From the beginning of the creation of our voting system, specific groups have been intentionally excluded as a way for people in power to hang onto their power by manipulating who does and does not get a chance to vote,” says Ami Gandhi, the Director of Voting Rights & Civic Empowerment at the Chicago Lawyers Committee for Civil Rights. “This is a critical step forward for protecting voting rights in Chicago and beyond.”

Considering that there are over 540,000 people in pre-trial detention across the U.S. and that Americans go to jail 10.6 million times each year, a movement to ensure that voters in detention aren’t being denied their voting rights stands to have a substantial impact. Contrary to the popular belief that jails only hold people for a few days or weeks at most, many spend months and sometimes even their entire sentences as time served in jail before even reaching trial.

Cities in particular are especially impacted. Currently 14 counties across the U.S., including those that contain major cities from Los Angeles to Philadelphia, have disproportionately high incarceration rates compared to other counties in their states.

“For decades, people in pre-trial detention have technically had the right to vote, but in a practical sense it has been so difficult to navigate that bureaucracy of exercising the right to vote in jail that only a fraction of eligible voters have been able to actually cast a ballot,” Gandhi says. “When we have mostly black and brown community members in Cook County jail and in other correctional institutions, that further widens the racial gap that we already see in our voting system in Illinois and across the U.S.”

The complexity of voting while in custody also has a disproportionate impact on low-income residents. “The difference between someone who is in jail and can’t access a voting place and someone who is awaiting trial outside of jail and can vote is simply whether or not someone can pay bail or not. That’s flat out wrong,” she says.

While one might imagine transforming the Cook County jail into a polling place to be the task of the century, it was actually a welcomed change across the board. Cook County Sheriff Thomas Dart laughs when recounting his first meeting with Chicago Votes, the group that has spearheaded several elements of the move, from the legislation to the upcoming implementation. Dart recalls the original meeting with Chicago Votes this way: “They came in ready to make this compelling case and I said, ‘Great! I’m already doing it, but I’m on board and want to take it further.’”

Dart was already taking an aggressive approach to ensuring that detainees had access to absentee ballots by working closely with the county commissioner and was happy to help Chicago Votes with their work.

Both Dart and Chicago Votes are particularly concerned about the educational components of voting as the work to make Cook County jail a polling place progresses. Important informational components include ensuring that detainees understand both the voting process as well as the fact that they’re still allowed to vote even if they’re in custody, something that many people assume they’re no longer allowed to do.

“Legally speaking their rights haven’t been taken away from them, but there’s not a structure in place for them to have access to all of the tools that the rest of us as citizens have access to, like same day voter registration and a polling station,” says Stevie Valles, the executive director of Chicago Votes. Valles and his team found that only eight Illinois counties were actually running a program that allowed their jail residents to cast an absentee ballot and that some county officials themselves didn’t even realize that people in pre-trial detention could still vote.

“We’re working on a curriculum right now as a requirement for [House Bill 2541] that will educate people who are being released from prison on their voting rights — something like government 101 that covers the different pillars of government,” Valles says.

While not all Illinois sheriffs and politicians are happy about the changes being made, Valles and Dart are undeterred.

“We’ve had some politicians try to throw a little bit of shade in our momentum, which is really sad, frankly,” Valles says, “but part of our larger battle is to change the culture of what politics are in Chicago.”

For Dart, dissenting opinions are par for the course for someone charting his own path. “I don’t interact with other sheriffs that often. They’re nice folks, but they look at their mission as different than I look at mine,” he says. “We’re the funnel back to the community for so many people. It’s not just our job to feed and house them. We need to work on strategies like integrating people into the voting system so they leave and feel like they’re a member of the community.”