A Cautionary Tale for Cities That Want Their Own High Line 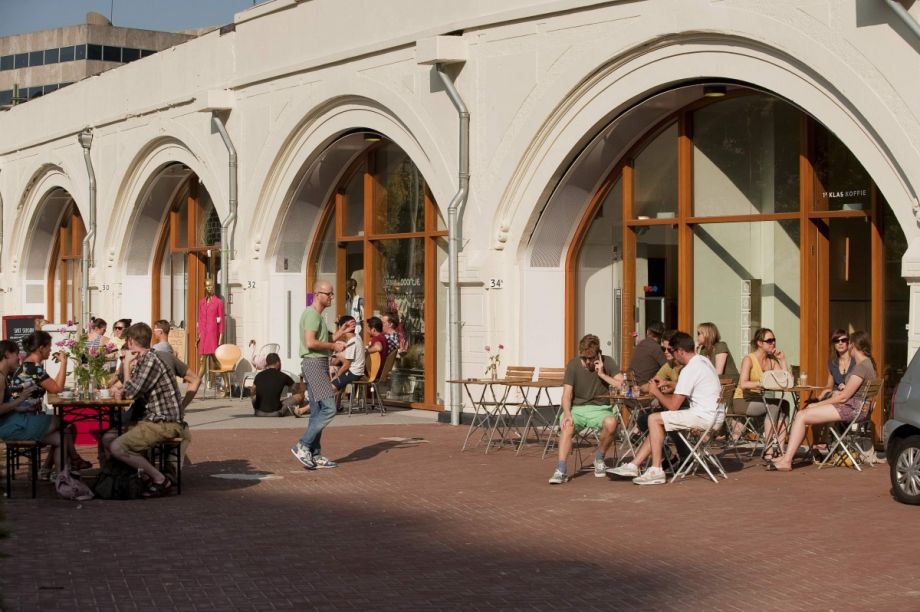 The Hofbogen has attracted people to a formerly unused area, but it’s far from realizing the planners’ original vision. Photo credit: Maarten Laupman

Sitting at a café with beer in hand, Simone Rots is completely relaxed. With her short brown hair swept back from her face, it would be difficult for the average passerby to guess the amount of blood, sweat and tears this woman has put into 1.9 kilometers of Rotterdam real estate.

Her efforts can be seen in the soaring arches under a disused, elevated railway that have recently been reclaimed as one of the hippest destinations in the city. With subtle architectural intervention and sweeping programmatic changes, this once-dangerous area, known as the Hofbogen, has become the new creative backbone for the local community. But the arduous journey to this point – which isn’t even the point Rots and her team were originally aiming for – also illustrates the difficulty of getting big urban projects done in a tough financial climate.

The 28.5-kilometer Hofplein railway was completed in 1908. It carried trains for a century, but its tracks have been unused since 2010. Though the Dutch railway operator Nederlandse Spoorwegen (NS) still owns the roof and the rails, the arches themselves were sold to four housing corporations that were looking for a good investment. But, in part because of the complexities of the dual ownership, maintenance of the viaduct slipped.

So in 2006, the same year construction on New York’s High Line park broke ground, the four housing corporations asked a group called Crimson Architectural Historians to transform the Hofbogen from a unused rail bridge into a public space that the city could be proud of. Together with her colleague Annuska Pronkhorst, Simone Rots was invited to direct the project.

“Their intention was to revitalize it, but they didn’t have a plan,” says Rots. So she and her team researched the neighborhood’s history and looked at what other cities had done. They poured over “examples like the High Line in New York, Promenade Plantée in Paris and the Wiener Stadtbahn in Vienna,” she says. They had no shortage of ideas or inspiration.

What they lacked was funding. “We learned that the transformation of those viaducts was mainly financed by national money… The Hofbogen had to be financed privately,” she says. Where they would get the money became their biggest challenge.

Determined to focus on the Hofbogen’s potential urban impact rather than financial complications, Crimson put together a “Future Vision” (Toekomst Visie: Hofbogen het langste gebouw van Rotterdam) that sketched out a scenario with guidelines for both the physical transformation and cultural/historical research. “The approach to transforming the roof and the arches should be diverse and complimentary,” Rots says they decided. “The viaduct examples [like the High Line] are nice, but they’re one-liners. We thought the Hofbogen program should relate to the needs and interests of the community around it. We launched the vision in 2008, on the centennial anniversary, and offered it to the city and local government.” Rots recounts wryly: “They were like, ‘Thank you!’ They were very helpful — but not financially.”

Resigned to the lack of public funds, the team pushed ahead. They decided to start with the roof of Station Hofplein, which forms the first, and broadest part of the viaduct. “We didn’t just want to restore a monument, we wanted to create a storytelling project. When you look at the history, this [area] was the place to go out. That’s where everyone danced the Huppa Huppa and the Charleston before World War II. This region was very famous for its nightclubs and Station Hofplein was a big part of that. We thought, okay, let’s try to test this program again on this same spot.”

Renovations began that same year on the first seven arches, or “Mini-Mall.” “Because of some events we facilitated on the roof and in the arches, people came again to this place and saw it anew,” says Rots. “Some entrepreneurs came to us and they asked to rent space under the arches.”

The crowds drawn to the new public space brought it back to life. Today, a communal inner area and open rooftop event space are flanked by vintage shops, a jazz café and popular coffee spots. This combination of long- and short-term rental possibilities creates a lively mix and constantly growing calendar. “We made the Mini-Mall together with the people who had come to us. They were brave enough to be pioneers in this space.” In May 2011, the Mini-Mall was officially opened and immediately claimed by a hip cross-section of Rotterdammers.

But, according to Rots, “Four years later, you see that the little shops are disappearing and the restaurants are coming. It’s really intended to be a ‘lifestyle’ place, but the volume isn’t great enough to support a real shopping atmosphere, so you have to do more. It’s also because of the crisis, of course.”

The outlook worsened when the Hofbogen team started looking for financing to renovate the next phase of the viaduct. In 2012, Vestia, one of the original four investors and the Netherlands’ largest social housing corporation, was left €2.5 billion out of pocket after failing to manage its risk on a €20 billion investment in derivatives. The ripple-effect of this financial shock led to a massive reorganization of all the Dutch housing corporations, and eventually the corporations were legally barred from investing in anything other than housing stock. Without the housing money, the team decided to put all the subsidies they had left into renovating Station Hofplein. “It was a kind of Plan B so that we wouldn’t lose the funding money,” says Rots.

The situation shows how large-scale public works-like projects can struggle when they don’t get the large-scale funding that public works projects typically get. Rots notes that although the project started out laser-focused on content, in the end, the Hofbogen became all about the financial concerns. “For us, it was very interesting, but also sometimes very tough, because we’re architectural historians,” she says. “The politics and the financing quickly became the main part of our work. And we were there for six years.”

In 2012 Rots and her team started developing an exit strategy for Crimson and a plan to hand the project over to the housing corporations to manage internally. “We thought that they would keep in mind the content, but we see now that it’s getting a bit lost,” she says. Because the housing corporations are now legally barred from investing in the viaduct itself, the project has reached an impasse. The Hofbogen project office seems to be focused on finding buyers rather than attracting new renters or exploring creative temporary solutions. “We’re trying to make the connection between the project office and the vision. But it’s a bit difficult because now we aren’t officially involved, of course. And what makes it more difficult is that the housing corporations are no longer allowed to invest in the Hofbogen at all. They have to sell it. But nobody wants to buy it because the business model is totally negative.”

Last year at the end of their involvement in the project, Crimson and MUF Architects published Hofbogen: One Compartment at a Time as an actualization of the original plan. In it, they suggest looking at the Hofbogen as compartments — like train cars — by integrating the roof with the program under the arches. “That way you can stimulate all kinds of initiatives that are now being started around the Hofbogen. For example, community gardens — you could integrate them at one end. When you look at the arch and the roof as one thing you have an integrated strategy. Just by looking at different compartments, you can create diversity and let the program develop more organically.”

Today, many of the early investors and local residents are appalled to see the momentum that was driving this groundbreaking project screech to a halt. For Rots personally, although she is no longer officially involved in the decision-making process, the project’s future is still a major concern. “Now we’re becoming more like activists. We have some distance so we can focus on the content while keeping in mind the reality, since we know the background. We’re trying to make people aware that there’s still something worthy here and that a viable plan already exists. Our goal is only to encourage people to look at it before doing something else. We’re also organizing meetings with the people who are renting the arches. Many of them are interested in buying their space. Our strategy is to bring those entrepreneurs together with the national funds who can provide tax benefits for restoration. Bring together the new collectives and maybe you have a new financial model.”

There are plenty of ideas for the Hofbogen’s future. The hard question is, will there be enough investment in this crumbling monument before it reaches the point of no return? For the Hofbogen, it may be now or never.