A Breakthrough for Technology in Norwegian Tunnel Project 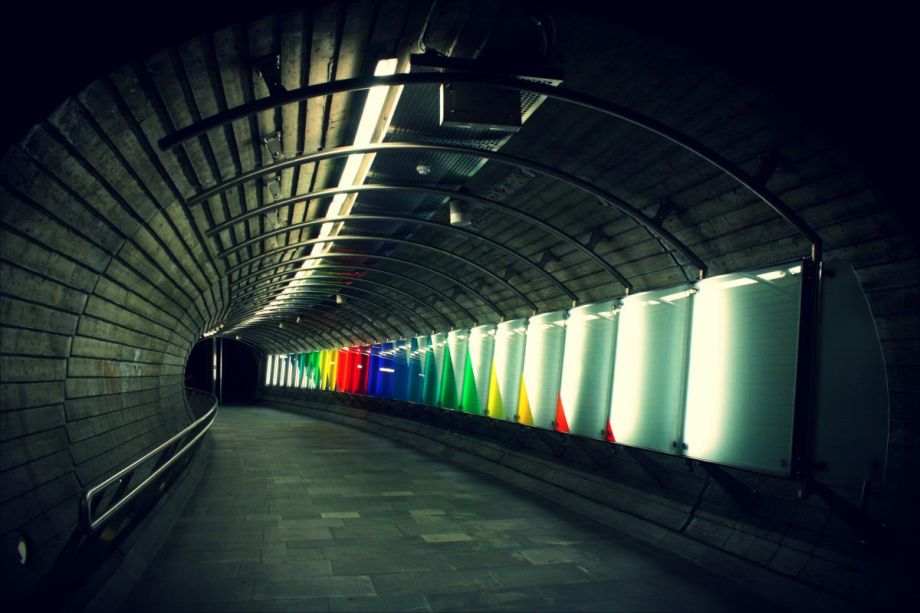 An underground metro station in Oslo. (Photo by Patrick Poculan)

Queen Eufenia and Queen Elisiv have achieved a notable feat. These are the two double-shield tunnel boring machines (TBMs) that have been digging their way through soil and rock beneath Oslo and its suburbs for the past two years. Global Rail News reports that on Sept. 11, 25,000 people watching on a live stream saw the two machines almost simultaneously break through 9.6 km (6 miles) of gneiss to finish their portion of two 20-km (12.4-mile) rail tunnels that will connect the Norwegian capital with the southern suburb of Ski, cutting the travel time between the two cities in half.

The milestone is a double breakthrough in a second sense: it demonstrated the power of modern tunneling technology in a country that has up to now been resistant to adopting it.

Gneiss, a type of rock formed by metamorphosis of other rock, is one of the hardest rock types in the world. Together, the two double-shield machines that broke through on Sept. 11 have carved their way through a total of 36 km (22.4 miles) of gneiss. Double-shield TBMs combine the functions of gripper and single-shield TBMs in a single unit.

The performance of Queen Eufenia and Queen Elisiv led Anne Kathrine Kalager, project manager for tunnel owner Bane NOR, to say that in the future, the machines will be “a realistic alternative in large projects, even in our extreme hard rock.”

While the two queens have finished their work in the direction of Oslo, two other machines, Anna from Kloppa and Magda Flatestad, continue digging through the same rock in the direction of Ski. They’re expected to break through in the spring of 2019. TBMs are performing the bulk of the digging on the two tunnels: 18.5 km (11.5 miles) of the total 20 km for each tube. The remaining 1.5 km are being dug by conventional drilling and blasting.

When complete in 2021, the two-track Folio Line will carry trains capable of speeds as high as 250 km/h (155.3 mph) over the 22 km (13.7 miles) between Oslo and Ski. The Folio Line project is the largest transport project currently underway in Norway, and the two tunnels are the country’s longest.

The initial segment of Line 7 runs 30.4 kilometers (18.9 miles) from Garden Expo North in the north to Yezhihu in the south, stopping at 19 stations on its 51-minute journey. The 13-station Line 11 is located in the city’s southeast and runs for 18.7 kilometers (11.6 miles) between Optics Valley Railway Station and Zuoling. The line is isolated from the rest of the Wuhan metro network until an extension of Line 2 opens later this year.

Trains on both lines will operate at top speeds of 100 km/h (62.1 mph). Both lines are currently being worked by six-car driverless trainsets built by CRRC Changchun and CRRC Zhuzhou. The trainsets will be expanded to eight cars in the future.

Suburb-to-suburb commuting remains a tough nut to crack for American transit agencies thanks to the dispersed nature of the origins and destinations. But in the not-too-distant future, Dallas will join Washington in having a rail transit line running on a belt route through suburbs north of the city. Railway Track & Structures reports that the Dallas Area Rapid Transit board unanimously voted to proceed with construction of a 26-mile-long east-west commuter rail line that will follow a former Cotton Belt railroad route from Plano in the east to DFW Airport in the west.

The line will have 10 stations, two fewer than were originally planned. Stations will be located in the cities of Grapevine, Coppell, Dallas, Carrollton, Addison, Richardson and Plano. It will also connect with DART’s Orange, Green and Red lines, the TEXRail commuter line from DFW to Fort Worth, and local bus services.

DART envisions that the line will help ease congestion in the Interstate 635 corridor, one of Texas’ most congested.

The project has an estimated price tag of $1.1 billion. Removal of the two stations trimmed $30.3 million from the budget. Service is slated to begin in 2022, with diesel multiple-unit trains operating at 30-minute peak headways and one-hour headways off-peak. DART’s 2040 long-range plan calls for peak headways to be reduced to 20 minutes in the future.

Know of a transportation project that should be featured in this column? Send a Tweet with links to @MarketStEl using the hashtag #newstarts.