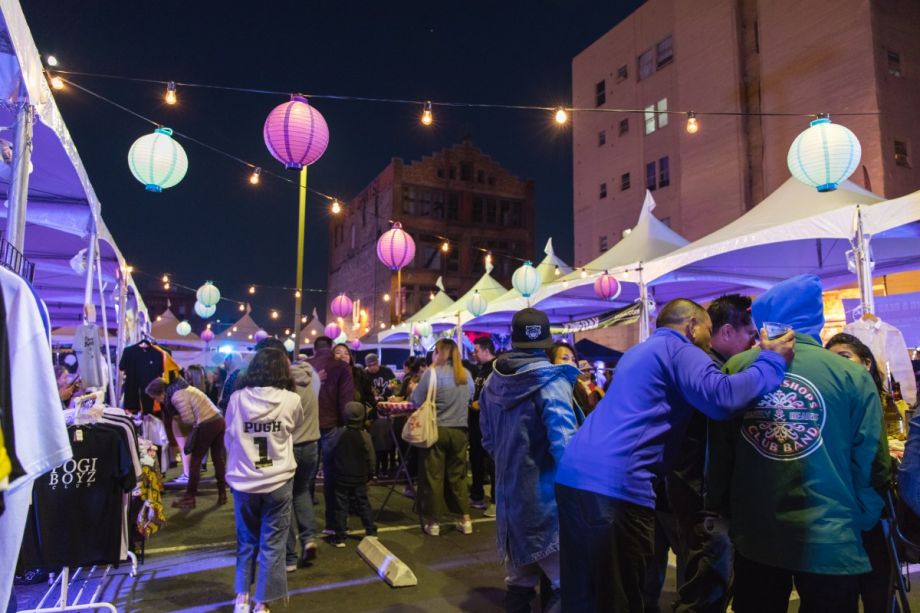 “Undiscovered SF,” hosted by SOMA Pilipinas, attracted 35,000 shoppers and generated $250,000 in sales for Filipino vendors this past year. (Photo courtesy of SOMA Pilipinas

It is proving to be another banner year — literally and figuratively — for SOMA Pilipinas, San Francisco’s first-ever Filipino cultural district. The designated area, located in the city’s South of Market (SoMa) neighborhood, is meant to revive and preserve the Filipino-American community that has a storied history there.

“Filipinos have been in the neighborhood for over 100 years, but throughout that period, they have faced constant threats of displacement,” says SOMA Pilipinas Director Raquel Redondiez. “The [cultural] district has been a platform for us to bring back not just residents that have been pushed out, but also small businesses — and also to push for economic and social justice.”

After several years of planning and organizing, which Next City covered previously, the cultural district received state designation in Summer of 2017. It’s now home to a seasonal night market, “Undiscovered SF,” which features established and emerging Filipino food, art, and live music of vendors and artists. Held once a month from July to November, the market attracted over 35,000 people last year, far more than the organizers anticipated. With $250,000 in sales, the 2017 markets generated twice in sales what the city provided in grants to the program.

Undiscovered SF vendor Deanna Sison, who operates three restaurants in SoMa, believes “Undiscovered SF” is a great platform for local businesses to be able to exhibit their products.

“There is such a large Filipino community that has made major contributions to the city that haven’t always been recognized,” Sison says. “To have a stage where they can showcase that has been an amazing opportunity.”

In August, SOMA Pilipinas received a $100,000 National Endowment for the Arts grant for a variety of streetscape design improvements in the cultural district. The funds will be used to develop a strategic plan for “creative placemaking” in SOMA — including new crosswalks, murals, and street furniture that pay homage to Filipino art and culture, according to Redondiez.

In July, banners went up along Market Street, a primary corridor of San Francisco, to promote the 25th anniversary of the Pistahan Parade and Festival, an international celebration of Filipino culture and cuisine. In October, to celebrate Filipino-American History Month, the organization hung up 300new banners all around SOMA.

“It celebrates our residents, our community workers, and cultural bearers, and basically declares that we’re here,” says Redondiez of the cultural activities.

SOMA Pilipinas also recently received a grant of around $300,000 from the Mayor’s Office for the continuation of the seasonal night market next year and for the creation of a pop-up-to-permanent retail incubator program. Partnerships with two local businesses — their names yet to be disclosed — are also underway, with the goal of renting commercial spaces to Filipino businesses at prices that are affordable.

“[Affordability] is a big concern,” says Danganan. Undiscovered SF is the sandbox for identifying businesses with potential, Danganan explains. “Next, we move them into the pop-up-to-permanent incubator, and then we move them into below-market-rate units,” he says.

By 2020, Kultivate Labs envisions a commercial strip of Filipino retail and other storefront shops peppered along Mission Street between Fourth and Eleventh Streets.

“You walk into the [Cultural District] now and you have no idea where it starts or ends because there is no business corridor that acts as that demarcation,” says Danganan. “There are already a lot of cultural anchors spread across the area. All we need to do is start to fill in the blanks with Filipino and other businesses.”

To further spur local economic development, SOMA Pilipinas and Kultivate Labs also plan to establish a merchant’s association by early 2019 with the goal of connecting customer-oriented businesses, like restaurants and stores, with wholesale and manufacturing firms. Eventually, the merchant’s association may merge with the SEED accelerator program, Danganan says. “We want to start to pair [these different types of businesses],” he explains, “so they can transact and so we can build a much stronger local economy.”

Sison believes these new initiatives are crucial in helping to counter the harsh realities of commercial displacement caused by gentrification. “It’s excruciating, sometimes, what small business owners have to go through,” she says. “It’s really important for organizations to help these small businesses stay in business.”

Golda Sargento, co-owner of Arkipelgo Books — a candidate for the SEED program — expressed excitement about the future economic development prospects for SOMA. The local bookshop, which has about 4,000 books in its collection, has national significance as one of the nation’s few brick-and-mortar Filipino bookstores. “It’s a small niche when it comes to businesses within the Filipino community,” she says. “We’ve been keeping that alive and really enjoying the position that we’re in … to provide a cultural resource.”

While satisfied with its current location inside the Filipino Community Center in SoMa, Sargento said the business would consider a temporary move to another location in order to be able to refurbish its space — or moving altogether to a storefront closer to bustling Fourth Street. “It’s exciting to think that we have these options,” she says.

Tags: arts and culture, san francisco, for whom by whom