In Bid for New Buses, L.A. Demands American-Made – Next City 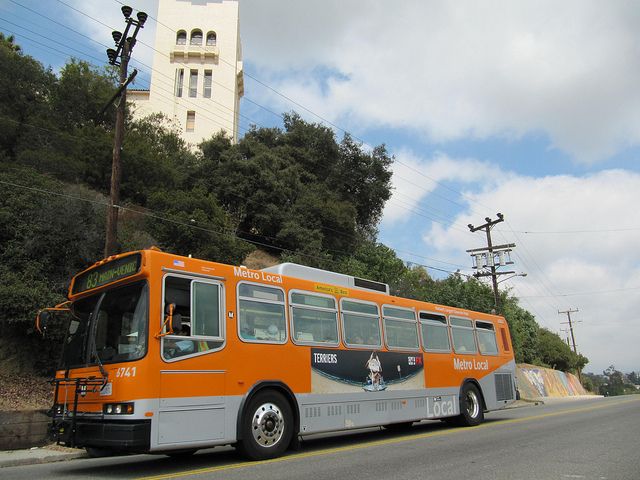 The regional transportation authority for Los Angeles placed an order for 550 American-made buses last month, Huffington Post reported Wednesday. The news comes at a time of presidential promises to both ramp up American manufacturing and rethink federal infrastructure spending.

The Los Angeles County Metropolitan Transportation Authority (L.A. Metro for short) struck a $305 million deal with a Canadian company, New Flyer Industries, to take charge on the creation of its new fleet of clean-fuel buses. The deal is unique in that it hinged on a commitment from the manufacturer to make the buses in the U.S. and create a certain number of quality jobs. (Most buses serving the U.S. are built outside of the country.)

Despite its base in Winnipeg, Manitoba, New Flyer Industries has factories at three different locations in the states of Minnesota and Indiana. It intends to expand operations at its manufacturing plant in St. Cloud, Minn. to accommodate L.A. Metro’s request — a move that the company says will result in 150 new jobs for the city of 66,000, and another 50 new jobs in L.A.

The agreement between L.A. Metro and New Flyer came out of an innovative approach for public procurement being piloted in L.A. The approach requires that companies bidding on the L.A. Metro contracts include a U.S. Employment Plan in their proposals. Detailing the quantity and quality of U.S. jobs that would be created by the company if it won the job, the plans allow job creation to be factored into the the agency’s decision, just like cost and any other factor typically examined through the procurement process.

Under the plan, the companies bidding on the publicly funded transportation equipment order had to describe the number and quality of American jobs that were to be created from the contract, as well as how they planned to develop the jobs (for example, recruitment, workforce development and training commitments). L.A. Metro then compared bids based on the cost of the transportation equipment plus the employment benefits and overall economic impacts.

This strategy for directly linking job creation to transportation procurement comes at an opportune time given all the recent attention on infrastructure investment and bringing manufacturing jobs to U.S. soil after decades of outsourcing.

As Next City reported yesterday, the Obama administration’s plan to reprioritize infrastructure spending likely won’t mean as much for transit as it will for highways and road bridges. But the White House does wish to at least invest in several hundred miles of new rapid transit, not to mention about 45,000 new buses.

If the administration also wants to restore the country to its position as a leader in production, why not make buses and trains a major part of the picture?