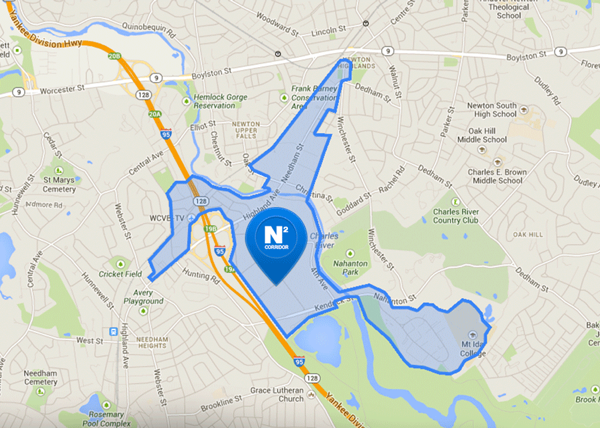 Route 128 in Massachusetts has been at the cutting edge of innovation, at the margins of obsolescence, and everywhere in between. In its early days, the half-ring around Boston was demeaned by the American Automobile Association as “the highway to nowhere,” but by the 1970s the road had established itself as a true competitor to Silicon Valley. It was home to hardware giants like DEC, Wang and Data General, and spillover from MIT and Harvard helped power the so-called Massachusetts Miracle economic boom.

But Route 128 largely missed out on the 1990s and 2000s as the tech momentum more fully concentrated on the West Coast, and later in cities like San Francisco, New York and Boston proper. As one local entrepreneur lamented in October, “It used to be king, Route 128.”

Now, a group of technologists, public officials and business leaders have a plan afoot to return outer Boston to its former glory, as the Boston Globe’s Evan Allen reports:

Today, the two suburban office parks straddling Interstate 95 on the Newton-Needham line are filled with low, drab buildings, many with empty windows and realtors’ signs advertising space inside. Workers walk from their cars to their offices and back again, and after 6 p.m., it’s a ghost town.

But in a few years? Imagine tall, modern structures, young professionals living close and biking to work at technology companies, a robotics firm testing mechanical marvels on the grass outside its doors, food trucks standing by at lunchtime, and live music at night.

This is the dream behind the “N2 Innovation Corridor,” envisioned as a high-tech hub of up-and-coming businesses in the spirit of Kendall Square or Boston’s Innovation District that officials in Newton and Needham hope will revitalize this more than 500-acre patch of worn-out suburbia.

Outer Boston’s Innovation Corridor is still very much in its brainstorming stage — discussions and promotion began only this past summer. It’s worth remembering that Route 128 has been the subject of deliberate reinvention in the past. AnnaLee Saxenian, dean of the School of Information at UC Berkeley and a Boston native, outlined the prospect of an outer Boston tech rebirth in her landmark book Regional Advantage: Culture and Competition in Silicon Valley and Route 128. It was likely, the professor predicted, to “take decades to overcome the management practices, culture, and institutions that have hindered the region in the past.” Saxenian was writing in 1995. The region is still hindered.

In particular, it’s worth watching what will happen in Newton-Needham because it directly challenges the idea, ascendent in the aughts, that cities are where innovation will happen from here on out. The bet outside Boston is, instead, that innovation can flourish in suburban areas with some of the amenities and advantages of a dense, urban experience. On those grounds, the area has a lot going for it. Newton (population 86,000) and Needham (population 29,000) are both sizable towns, starting at about a dozen miles west of Boston. “It’s a perfect combination from a transportation perspective,” Justin D. Krebs, a partner in the local Normandy Real Estate Partners, has said, “from being able to be halfway between Boston and the more proper suburbs.”

Here’s the Globe’s Allen again, citing the president of the Newton-Needham Chamber of Commerce:

There is still much work to be done. If the N2 Corridor is to become a reality, said [Greg] Reibman, it needs three things: infrastructure, transportation, and something a bit more elusive — that “coolness” — that Kendall Square and the Innovation District seem to possess so effortlessly. The “bump factor’’ — running into people you know while cruising around — is crucial, he said.

There’s a lot baked into Reibman’s encapsulation of the project. Let’s start with the focus on infrastructure and transportation.

When supporters of the N2 Corridor talk about the travel framework it will need to succeed, they lump together both driving and public transportation. The area supports both right now, they say, though they want more of each. “We have ready access to the interstate highway and we have a new interchange coming through, directly serving the park,” Dan Matthews, chairman of the Needham Board of Selectmen, has said. The state, project advocates point out, is planning to expand the highway as part of its Add-a-Lane program. “We have nearby access to both the green line into Boston and commuter rail as well,” Matthews said.

In other words, they recognize that it’s smart to talk about people commuting en masse to Newton and Needham, but they also want to reassure the revived 128 corridor would be a place where people could drive to work, too.

One of the project’s biggest early supporters is Stephan Kaufer, CEO of TripAdvisor, the social travel site that has long been headquartered in Newton but which just broke ground on a custom complex in Needham. The company chose the area upon its founding in 2000, Kaufer has said, because a number of people involved in its creation lived locally. “The Newton-Needham area just offers so much,” Kaufer says in a video posted to the N2 site. “In fact, we believe it offers a lot more than a Boston or Cambridge area because it’s able to attract a lot more employee base [sic].”

How so? The pitch is that Newton and Needham have a certain appeal among those for whom the buzz of Harvard Square or the charms of the Back Bay — not to mention the environmental upsides of both living and working in dense Cambridge or Boston — might fall short.

“It’s just a wonderful location for those who are perhaps in the stage of life where they don’t want to have to commute into the Boston area,” Kaufer says. “Folks who live out in the suburbs aren’t all that interested, by and large, in commuting and fighting that downtown traffic every single day.” Note the not-so-subtle suggestion that there are folks who age out of living and working in Boston, but who still might want to toil away in the tech industry.

At the same time, what N2 supporters seem to want is creating a city-like experience by nudging along the sort of growth that Newton and Needham are already seeing. About 150 tech or innovation companies now exist in the area, proponents say. Fans of the plan talk about adding to the mix co-working spaces and business incubators, housing within walking distance of tech headquarters, and an extension of the Hubway bike sharing program.

Finally, there’s the Chamber of Commerce president’s mention of “the bump factor” — that is, “running into people you know while cruising around.” It’s notable because the standard line among both academics and armchair analysts on what led to Route 128’s downfall is that its iconic firms were organized as big, standalone companies that handled their business from soup-to-nuts — “integrated” is the term you hear. Meanwhile, the tech industry was benefitting from the interdependency that comes from smaller, targeted firms sharing employees, ideas and purchase orders.

In this second decade of the 21st century, by all appearances, outer Boston has come to embrace the bump. Making the bump happen amid office parks is another story.