How 60 U.S. Cities Stack Up on Residents’ Financial Health – Next City

How 60 U.S. Cities Stack Up on Residents’ Financial Health 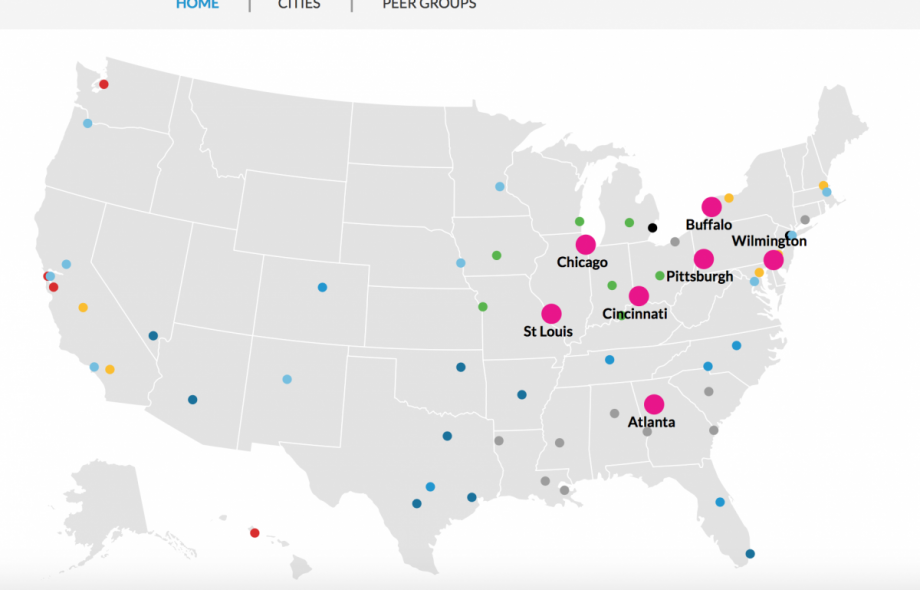 Chicago and Buffalo, New York — two cities that aren’t often paired by similar characteristics — actually have a lot in common when considering financial factors like credit scores, delinquent debt and housing cost burden. The two cities, along with Atlanta, Pittsburgh and St. Louis, fall under the category of “Cities with Tenuous Stability and Uneven Opportunities,” in a new interactive report released by the Urban Institute called The Financial Health of a City.

The report says it examines metrics that reflect three dimensions of residents’ financial health: “residents’ ability to manage daily finances, be resilient to economic shocks, such as an income drop or unexpected expense, and pursue opportunity to move ahead.” Researchers then broke the cities into “peer groups” by similar characteristics. The group including Chicago and Buffalo has mixed economic conditions and stagnant or shrinking populations — although Atlanta is an exception. It’s also defined by sharp racial inequities.

For example, the peer group’s median credit score isn’t far below the national average — 669 vs. 675. But break that score down by demographics and you get a clearer picture: The peer group’s credit score is 717 in white neighborhoods and 568 in neighborhoods that are home primarily to people of color. That’s a sharper disparity than the national average. The peer group also has significantly more people living below 200 percent of the federal poverty level.

Other peer groups include “Prosperous Cities with High Housing Costs,” (hello Seattle, San Francisco, San Jose and Honolulu) “Rapidly Growing Cities with Threats to Financial Stability” (Denver, Nashville, Austin) and “Cities with Economic and Housing Cost Challenges” (Baltimore, Fresno, California and Philadelphia). Each peer group comes with a set of policy recommendations. For the group including Buffalo and Chicago, the report recommends integrating financial and savings interventions into existing programs and platforms, like housing, tax preparation and public utilities. It also recommends that officials assess city debt collection practices and provide constructive options for families to repay debts owed to the public sector.

As Next City has covered, urban financial health was also dealt an obvious blow by the Great Recession, and although general funds were, overall, climbing, they hadn’t reached pre-Recession levels in 2016. Add to that the threat of low housing inventory and rising rents, and you have a recipe for unequal wage growth overall.