5 Big Transit Projects Brazil Got from the World Cup 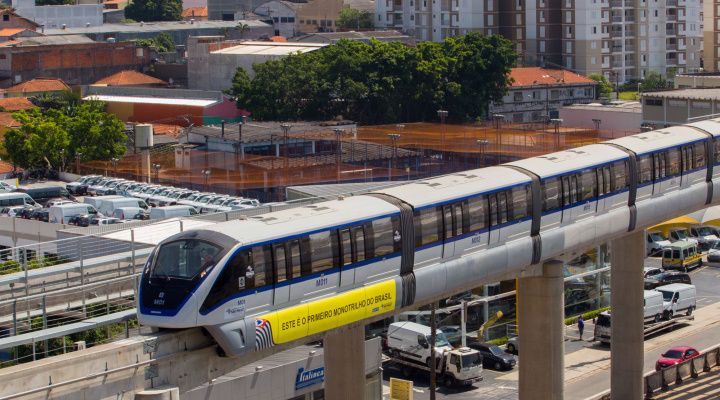 The São Paulo monorail, which is only partially completed. Photo credit: Government of the State of São Paulo

In this week’s Forefront, Ghettos of the World Cup, Catherine Osborn examines the public housing boom that spread through Brazil in the run-up to the World Cup and the 2016 Olympics. Here, Greg Scruggs looks at the other big projects Brazil tried to build as the event approached, and finds a mixed bag of impressive new infrastructure and unfinished boondoggles.

When governments attempt to sell the public on sporting mega-events, appeals to civic pride and a temporary boost to businesses only go so far. People want to see a lasting legacy of spiffy new infrastructure left behind, and the leaders of Brazil, which is currently hosting the World Cup, are under extra pressure to deliver such goodies. This year’s Cup has been a particular headache for Brazilians and visitors, marred by protests and transit shutdowns. São Paulo narrowly averted the continuation of a subway strike that would have paralyzed the opening match, and a bus strike in flooded Natal – where heavy rains have created an official state of emergency – made it tough for U.S. fans to arrive in time for last night’s match against Ghana.

President Dilma Rousseff knows this (it’s been hard to miss – she was booed and treated to a vulgar chant during the Cup’s opening match) and so she’s deployed some rhetorical jujitsu. While inaugurating Rio’s latest BRT line, Rousseff said, “Personally, I think that none of the legacies are for the World Cup, but rather all the legacies are for the Brazilian people. For example, we aren’t building airports for the World Cup. We’re building airports for all Brazilians. By chance, they’ll be used during the World Cup.” This assertion that World Cup-related infrastructure isn’t for the World Cup is absurd. If that’s true, then why not build it and forget about the soccer, saving the country from building or renovating 12 (supposedly) completed stadiums, 10 of which are now among the world’s 20 most expensive? Why not avoid altogether the cost overruns, no-bid contracts and compromises on worker safety that have plagued the breakneck pace to meet the World Cup deadline?

Amidst all the rancor, some of the planned legacy projects actually did get built, with a flurry of last-minute inaugurations by Rousseff and other dignitaries in the final month. On the other hand, plenty didn’t. A survey by Globo Network’s G1 online portal (Portuguese only) determined that 51.7 percent of the urban transit and airport projects directly attributable to the World Cup were in fact completed. Even among the 45 projects that have been inaugurated, however, 15 are still partially incomplete, and another 10 will supposedly be inaugurated during the month-long tournament. In turn, of the overall 74 transit and 13 airport projects, 32 were simply not ready by kickoff and will only be completed after the competition – but with the pressure and the spotlight off, there is always the risk that they might drag on even longer.

High-speed rail between Rio and São Paulo
The coveted trem bala (bullet train) that would have connected the country’s two largest cities was first proposed in 2007 with inevitable promises that it would be ready in time for the 2014 World Cup. The most recent proposed route would have run 322 miles (518 kilometers) from downtown Rio to São Paulo and on to the university town of Campinas, with stops at three international airports along the way, at a cost of $16 billion USD. For a country with no significant intercity rail network, high-speed rail could have inaugurated a new era in a country that currently relies on buses and airplanes. But several requests for proposals since 2010 have gone unanswered – much to the embarrassment of the Brazilian government – as the major global players don’t see the route as economically viable because of the challenging topography and potential market share. The most recent RFP, in August 2013, was postponed yet again, this time for a year.

Light rail for Brasília
Known by its Portuguese initials VLT, light rail is a newcomer to the Brazilian transit scene. A line from the airport to downtown would have provided an alternative to taxis and buses, but it was canceled in November 2012. The media has blamed the federal district’s governor for succumbing to the powerful bus lobby, which managed to get the VLT swapped out for a dedicated bus lane (but not true BRT).

Public transit in Manaus
The Amazonian city of Manaus is the furthest-flung of all the World Cup sites. It’s no sleepy river town – 2.3 million people live there – but it’s struggled to justify the cost of World Cup transit investments. The governor nixed a BRT proposal in 2012 and declared a monorail equally unviable in 2013, leaving Manaus without any tangible legacy from the event other than a white elephant stadium.

Airport upgrades in Belo Horizonte and Fortaleza
As the Brazilian middle class grows, air travel has become affordable for a larger segment of society, and the country’s modest airports, especially in secondary cities, have long needed a facelift. Belo Horizonte is Brazil’s third-largest city, a growing business hub with direct flights to Latin America, the U.S. and Europe, but its airport upgrade remains a noisy construction site of dusty scaffolding right next to where passengers check-in. At least it’s ahead of Fortaleza, in northeastern Brazil, where fans negotiate a temporary structure with a canvas roof. Despite this jury-rigged solution, the secretary of civil aviation declared it “absolutely adequate” to receive travelers during a site visit on June 4.

Monorail in São Paulo
Simpsons jokes aside, São Paulo has already built one-third of a 17.7-kilometer (11-mile) monorail that will ultimately run from the city’s domestic airport to the wealthy Morumbi neighborhood, intersecting a suburban rail line along the way. But one-third isn’t good enough considering that, other than a stadium, this project was the only one that the state of São Paulo officially agreed to deliver in time for the World Cup. When Morumbi Stadium fell out of political favor as the city’s host stadium, the project suddenly became a monorail to nowhere – nowhere, at least, relevant to World Cup transit patterns. $1.5 billion USD later, the line is scheduled for completion in 2016.

BRT in Rio, Belo Horizonte, Curitiba, Fortaleza, and Recife
Brazil invented bus rapid transit in the 1970s when Curitiba installed the world’s first dedicated bus lanes and freestanding stations. The southern city’s BRT system is getting a World Cup-funded facelift, while many of its sister cities across the country have jumped on the BRT bandwagon. Rio promises to have the world’s largest BRT network by the Olympics in 2016, and got one step closer with the inauguration of its second line, Transcarioca, on June 1, which provides a much-needed alternative to overpriced taxis and overcrowded coach buses from the international airport. Belo Horizonte’s new system, BRT/Move, has been running since February and is considered the city’s principal Cup legacy. Fortaleza appears to have built BRT-lite (just dedicated corridors) while Recife’s land appropriations for BRT infrastructure have raised alarms with the UN Special Rapporteur on the Right to Adequate Housing.

New terminals in São Paulo and Cuiabá, and a new airport in Natal
Guarulhos International in São Paulo is Brazil’s primary port of entry for foreign visitors – and a long-standing source of complaints. FIFA Secretary-General Jérôme Valcke lamented in 2011, “To leave the airport takes half a day. This cannot happen during the tournament.” But a month ago, what is arguably the largest non-stadium infrastructure project of the World Cup was completed as Terminal 3 opened its jetways to the public and other parts of the airport were spruced up to a total tune of $1.3 billion USD. For the far more modest cost of $500 million USD, Cuiabá, the smallest host city at just over half a million, has a new terminal to its name as well, which will more than double capacity. Meanwhile, Natal is the only city to have built an entirely new airport for the World Cup, which was inaugurated on May 31 to replace an aging one closer to the city that will revert to military use.

Light rail in Fortaleza and Cuiabá
At least two cities got their VLT off the ground, if not actually running on the ground. Cuiabá’s first foray into heavy-duty public transit will run from the airport to the city center, but will only begin transporting passengers in 2015 even though it was included in the state of Mato Grosso’s official agreement with FIFA and, at a price tag of $700 million USD, was the most expensive transportation project of the Cup. Fortaleza, meanwhile, has built a 13-kilometer light-rail line that will not quite make it to the doorstep of the Castelão Stadium, the first of the World Cup batch to be completed. Fans will have to make their own way for the final stretch.

Belo Horizonte’s Operations Center
In a victory for smart-city advocates, BH, as the capital of Minas Gerais is known colloquially, inaugurated an integrated operations center that will help the city monitor traffic flows and improve security via a closed-circuit camera system. It follows on the heels of a similar center in Rio, designed by IBM, that also aggregates weather, utility, crime and other data. Civil libertarians criticize such centers as concentrating too much surveillance power in the city’s hands, which can be used against the public when it comes to events like protests.

Brazil’s electrical grid
Over 200 upgrades have been made to the country’s electrical systems in the 12 host cities since 2010, enough to make President Dilma refer to the “robustness” of Brazil’s energy grid ahead of the Cup and deny any possibility of a blackout. She didn’t quite get her wish: stadium lights at the eastern end of the Itaquerão Stadium went dark for fifteen minutes during the Brazil vs. Croatia opening match, although the failure didn’t impact play. A handful of planned improvements to the grid were not completed by Cup time, but the Minister of Mines and Energy has promised the public they were not necessary for the event’s increased demand, although he refuses to reveal the details about exactly what those projects are.